Students everywhere are out on the streets, rallying against police violence on Jamia students and demanding the repeal of the Citizenship Amendment Act 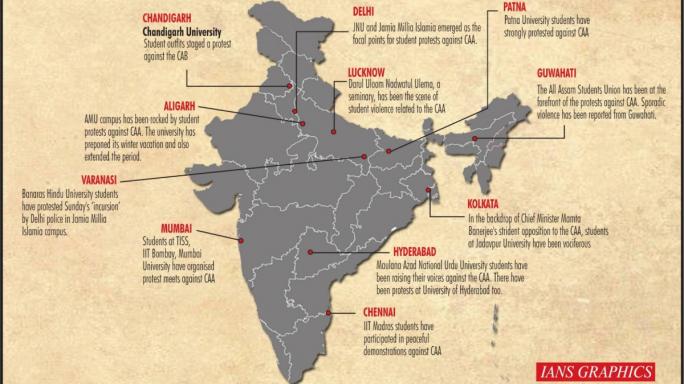 Students from across the country continue to come out in support of Jamia Millia Islamia (JMI) students after the crackdown by the Delhi Police on the campus on Sunday evening, leaving about 200 people injured. What started, by all accounts, as a peaceful protest against the Citizenship Amendment Act (CAA) on the campus, rapidly turned violent when miscreants reportedly torched four public buses and two police vehicles. Although Delhi Police has rejected all charges of excessive force, videos and accounts emerging on social media of police firing and injured students in the university, have been bitterly criticized on social media. The police entering women’s hostels, and a library, which surfaced on a social media video clip, caused all round consternation.

Here, is a round-up of the protests from different parts of the country:

Panjab University students staged a protest in Chandigarh against the police action in Delhi. A students’ outfit, Student for Society (SFS) was at the forefront of these protests. The same outfit had also protested soon after the Citizenship Amendment Bill was passed by Parliament. The students feared that many who would be declared “illegal immigrants” end up in “concentration camps.”

Although students of the Aligarh Muslim University have been protesting against the new law, the Jamia incident had them moving out of the campus with the police trying to stop them. This led to violence, with the police resorting to tear gas and water cannons. The University has been shut until the new year and all examinations have been postponed.

The students of Benares Hindu University in Varanasi staged protests against the police action in Jamia. Several student unions including All India Student Association and Bhagat Singh Students Morcha joined the march. The University had also seen protests soon after the citizenship law was amended by the central government.

Hundreds of students of Mumbai's Tata Institute of Social Sciences (TISS) boycotted classes and came out to express solidarity with the students of the JMI and Aligarh Muslim University. The students were joined by some members of TISS faculty, with several of them carrying placards against CAA and the central government.

Hundreds of students in Chennai were out on the streets in full force to protest against the Citizenship Amendment Act and police brutality against students of Jamia. There were also reports by evening of December 17 that police had entered the Chennai University to break the protests.

The Moulana Azad National Urdu University (MANUU), in Hyderabad, is said to be country’s only Urdu University and its students, in hundreds, gathered on the campus on Sunday well into the night and raised slogans against Delhi Police and the central government. The students wanted immediate action against the police. There were reports that the students have decided not to participate in semester exams.

The students of Jadavpur and Presidency Universities participated in rallies calling for action against Delhi Police for entering the Jamia campus. The protesting students carried placards against the new citizenship law and police crackdown. The Jadavpur University Teachers' Association (JUTA) also came out in support of the students. Kolkata University also witnessed protests.

The city was rocked by violent protests against the new citizenship law on Sunday. This was followed by student protests in support of the Jamia students. On Sunday, several cops were injured with many allegedly attacking the police and the vehicles.

Students of Darul Uloom Nadwatul Ulama, or Nadwa college tried to come out of their campus to protest against the violence in Jamia, but the Uttar Pradesh Police and the local administration convinced the students to stay within the campus. With the numbers of students increasing, the police closed the gates from outside, not allowing any protester to come out and protest. There were instances of stone-pelting by the students, from other parts the city, followed by clashes with the police.

Universities and colleges all across the state erupted in protest against the CAA. Students from the Cotton University, Tezpur University, Gauhati University and Assam Engineering College took to the streets, vehemently protesting the passage of the CAB. The All Assam Students' Union (AASU) with a history of the six-year Assam Agitation, which resulted in signing of the Assam Accord, was a huge part of these protests. As a state that is at the heart of the NRC and CAA politics and with a long history of protests against illegal migration into the state, the current agitation were joined in by large sections of the people. In light of the intensification of the protests, exams have been rescheduled across institutions. These protests also saw the deployment of Paramilitary forces and violent police action, with the state imposing a curfew and a ban on internet services.

Do You Like This Story?
5
5
Other Stories
Please enter valid text
Must Reads
Latest Issue