The Bear Who Came To Dinner: A 7-Foot Behemoth Strikes A Remarkable Friendship With The Author

The author had heard about wild animals that bonded with humans. But this seven-foot Goliath had claws that could shred a tree. He also had a remarkably understanding nature I met Bosco in the remote wilderness near Mount Robson in western Canada. At the end of a long day of backpacking, I had made a lean-to in a clearing beside a stream and was preparing to catch supper. Then I looked up, and there he was: an enormous boar black bear, slowly circling the clearing within 90 feet.

He wasn’t Bosco to me yet, and I viewed his presence with trepidation. My provisions were vulnerable if he was in a piratical mood, since I was unarmed. However, I decided to go about my fishing. The bear came along.

I’ve lived with wild creatures for 30 years, respecting their first fear—fast movements—so I let him see every slow, deliberate move I made. Soon he was sitting on his haunches less than five feet away, intensely interested in my activity. When I landed a 14-inch Loch Leven trout, I tossed it to him. He gulped without bothering to chew. And when I flipped out the fly again, he moved closer, planted his well-upholstered fanny on the turf beside my boot and leaned half his 250 kilos against my right leg!

When drizzly darkness set in, I was still fishing for that bear, fascinated as much by his gentle manners as by his insatiable capacity. I began to think of him in a friendly way as Big Bosco, and I didn’t mind when he followed me back to camp. After supper I built up the fire, sat on the sleeping bag under the lean-to and lit my pipe. All this time Bosco had sat just outside the heat perimeter of the fire, but the moment I was comfortably settled, he walked over and sat down beside me. Overlooking the stench of wet fur, I rather enjoyed his warmth as we sat on the sleeping bag under the shelter. I listened to the rain thumping on the tarp in time with the steady, powerful cur-rump, cur-rump of his heartbeat beneath his thick coat. When smoke blew our way, he snorted and sneezed, and I imitated most of his body movements, even the sneezing and snorting, swaying my head in every direction, sniffing the air as he did. Then Bosco began licking my hands. Guessing what he wanted, I got him a handful of salt. He enthusiastically nailed my hand to the ground with his four-inch claws—claws capable of peeling the bark from a full-grown cedar, claws that carried his 250-odd kilos at full gallop to the top of the tallest tree, claws that could rip a man’s body like a bandsaw. Finally the last grain of salt was gone, and again we sat together. I wondered if this could be for real.

Bosco stood up on all fours; burped a long, fishy belch; and stepped out into the rainy blackness. But he soon was back—with a message. He sat down near the sleeping bag and attempted to scratch that area of his rump just above his tail, but he couldn’t reach it. Again and again he nudged me and growled savagely at the itch. Finally I got the message and laid a light hand on his back. He flattened out to occupy the total seven feet of the lean-to as I began to scratch through the dense, oily hair.

Then the full significance of his visit hit me. Just above his stubby tail, several gorged ticks were dangerously embedded in swollen flesh. When I twisted out the first parasite, I thought I was in for a mauling—his roar shook the forest. But I determined to finish the job. Each time I removed a tick, I showed it to him for a sniff before dropping it on the fire, and by the last one he was affably licking my hand.

A cold, sniffling nose awakened me several times during the night as the bear came and went. He left the sleeping bag wetter and muddier each time he crawled around over me, but he never put his full weight down when he touched any part of my body.

The next day I set off again, over a ridge, down through a chilly river, up the next crest, through thickets of birch and alder and down a wide, north-running river canyon. To my surprise, Bosco followed like a faithful dog, digging grubs or bulbs when I stopped to rest. That evening, I fished for Bosco’s supper. 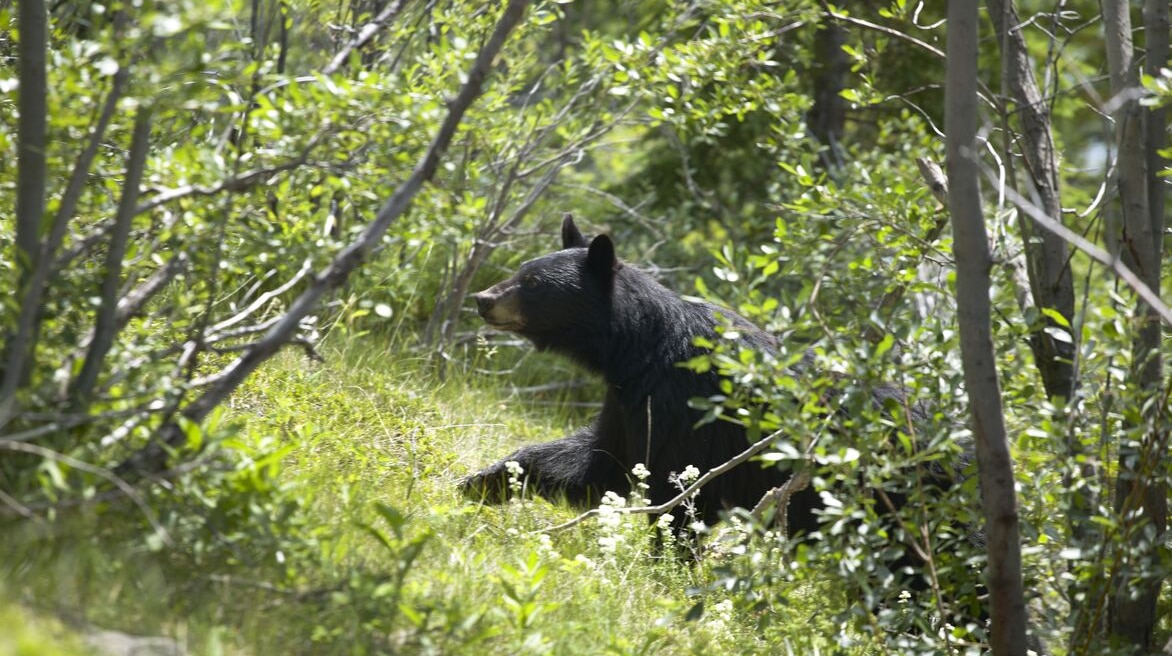 As the days passed and I hiked north, I used a system of trout, salt and scratch rewards to teach the bear to respond to the call “Bosco!” One evening, he walked over to the log where I was enjoying my pipe and began to dig at my boots. When I stood up, he led me straight to a dead hollow bee tree at which he clawed unsuccessfully. Returning to camp, I covered my head with mosquito netting; tied shirt, pants and glove openings; and got the hatchet. I built a smoke fire near the base of the tree and hacked away until the hollow shell crashed to earth, split wide open and exposed the hive’s total summer production. For my understanding and efforts, I received three stinging welts. Bosco ate 9 kilos of honeycomb, bee bread and hundreds of bees. He snored most of that night at the foot of the sleeping bag.

At campsites, Bosco never tolerated long periods of relaxation and reflection, and true to my sucker form where animals are concerned, I babied his every whim. When he wanted his back scratched, I scratched; when he wanted a fish dinner, I fished; when he wanted to romp and roll with me in the meadow, I romped and rolled—and still wear scars to prove that he played games consummately out of my league.

During one particularly rough session, I tackled his right front leg, bowling him over on his back. As I sat there on his belly regaining wind, he retaliated with a left hook that not only opened a two-inch gash down the front of my chin but also spun me across the meadow. When I woke up, Bosco was licking my wound. His shame and remorse were inconsolable. He sat down with his ears back and bawled like a whipped pup when I was able to put my arm around his neck and repeat all the soft ursine vocabulary he had taught me.

It is not my intention to either attribute character traits to the bear that he could not possess or exaggerate those he had. I simply studied him for what he was and saw him manifest only the normal qualities of his species, which were formidable enough without exaggeration. Other than calling him Bosco, I never attempted human training upon him. On the contrary, I did everything possible to train myself to become a brother bear.

The affection we developed for each other was spontaneous and genuinely brotherly. When it occurred to him to waddle over my way on his hind legs, grab me up in a smothering bear hug and express an overflowing emotion with a face licking, I went along with it for two reasons. First, I was crazy about that varmint. Second, I nourished a healthy respect for what one swat from the ambidextrous giant could accomplish.

Although his size and strength made Bosco almost invulnerable to attack by other animals, he had his own collection of phobias. Thunder and lightning made him cringe and whine. When whisky jacks flew into camp looking for food, he fled in terror, the cacophonic birds power-diving and pecking him out of sight.

Bosco’s phenomenal sense of smell amazed me. Trudging along behind me, he would suddenly stop, sniff the air and make a beeline for a big, succulent mushroom 600 feet away, to a flat rock across the river under which chipmunks had warehoused their winter seed supply, or to a berry patch two ridges over.

One afternoon when we were crossing a heath where dwarf willows grew in hedge-like clumps, Bosco suddenly reared up and let out a “Maw!” I could detect no reason for alarm, but Bosco stood erect and forbade me to move. He advanced, began to snarl—and pandemonium broke out. Every clump of willows sprouted an upright bear! Black bear, brown bear, cinnamon bear and one champagne (all subdivisions of the same species).

But these were young bears, two-year-olds, and no match for Bosco. He charged his closest contestant with the fury of a Sherman tank, and before the two-year-old could pick himself up, Bosco dispatched a second bear and tore into a thicket to dislodge a third. At the end of the circuit, my gladiator friend remembered me and scoured back, unscathed and still champion.

That night, we sat longer than usual at the campfire. Bosco nudged, pawed, talked at great length and looked me long in the eye before allowing me to retire. In my ignorance, I assumed it was a rehash of that afternoon’s battle. He was gone most of the night.

Along towards next mid-afternoon, I sensed something was wrong. Bosco didn’t forage but clung to my heels. I was looking over a streamside campsite when the big bear ­about-­faced and broke into a headlong, swinging lope up the hill we had just descended. I didn’t call to him as he went over the crest, full steam, without once looking back. 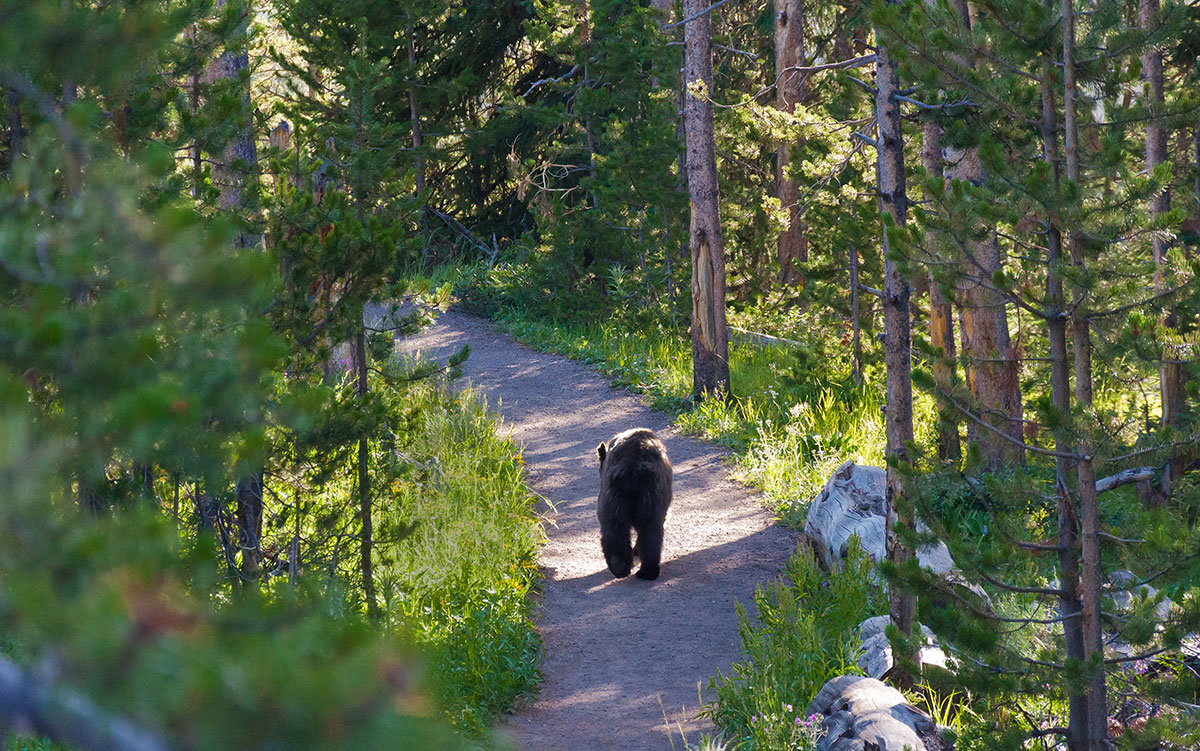 That evening, I cooked supper with one eye on the hillside, then lay awake for hours waiting for the familiar nudge. By morning, I was desolated: I knew I should never again see big brother Bosco. He left behind a relationship I shall treasure.

Robert Franklin Leslie wrote 10 books about his adventures in the wild. His most famous, The Bears and I, was made into a 1974 Disney movie. ­Patrick Wayne, John Wayne’s son, played Leslie.

This article originally appeared in the December 1964 edition of Reader’s Digest.

Do You Like This Story?
22
0
Other Stories
1
Please enter valid text
Must Reads
Latest Issue