How leading English newspapers in India woke up to freedom As India awoke to its freedom from over 200 years of British rule, leading English newspapers in the country, celebrated it on their front pages on the morning on 15 August 1947.The free press in India celebrated the birth of a nation in unison, yet the tone of reportage varied⁠—from festive to cautious and grim. The news elements covered that morning were also diverse: Jawaharlal Nehru’s midnight speech, the historic session of the Constituent Assembly and celebrations across India dominated page one. The announcement of the new cabinet also found place of prominence in most papers. The spirit of celebration, however, was marred by Partition and the violence and death that had erupted in its wake. Goes without saying that the quality of reportage and the editorial voices of some of these iconic newspapers stand out 72 years later.

Here, a look at how the news mill in India reported and responded to the birth of a new India. First published on 20 February, 1868, Amrita Bazar Patrika (originally published in Bengali as a weekly) was started by two brothers, Sisir Ghosh and Moti Lal Ghosh (sons of a rich merchant from Magura in Jessore District in the Bengal province). The paper was at the forefront of the struggle for Independence and changed from Bengali to English in the wake of the Vernacular Press Act of 1878, which muzzled the freedom of the vernacular press in India from criticizing the British rule. The front page of the newspaper, on August 15, 73 years ago, was bold and dramatic: It ran a picture of Mahatma Gandhi, the Indian flag and the new map of sovereign India. There was one single headline in large type announcing, “We Bow to Motherland”. Below it was emblazoned “Free!’’. There were no other news items on the front page.

The Civil And Military Gazette The Civil and Military Gazette was an English daily newspaper by publisher E.A. Smedley. Legendary author and poet, Rudyard Kipling worked as an assistant editor at the paper when Stephen Wheeler was its editor-in-chief. The paper, based out of Punjab, dwells on the slaughter of innocent people in the wake of Partition rather than celebrating India’s newfound freedom. Even though the full front page is not visible in the archived image procured by Reader’s Digest India, it is clear that the tone of the top half was not celebratory.The lead story, across five columns, reported grim accounts of communal violence in the city of Lahore. The Pioneer was founded in Allahabad in 1865 by George Allen, an English businessman. (Fun fact: Rudyard Kipling worked as Assistant Editor at The Pioneer). The lead headline on August 15 1947 reported the new cabinet’s fervent appeal to the nation to ‘End Violence in Every Shape and Form’ in order to contain free India’s bloody internal strife. This message of peace and reason is reflected in a sombre, responsible tone on the front page, while celebrating Independent India was a running theme on the front page. Source: The Hindu (colour rich edition published by The Hindu)

The Hindu was founded in Chennai (then Madras) by T. T. Rangacharya, P. V. Rangacharya, D. Kesava Rao Pantulu, N. Subba Rao Pantulu, Subramania Iyer and M. Veeraghavacharyar. Launched in 1878 as a weekly, it was transformed into a daily in 1889. Doing away completely with front-page headlines, the paper took a surprisingly advertiser-friendly route that morning with leading industries congratulating Independent India⁠—a far cry from the paper’s strong editorial accent in the later years.

The Times Of India Headquartered in Mumbai, with its first edition hitting the newsstands in 1838, The Times Of India (originally called The Bombay Times and Journal of Commerce) was published by Bennett, Coleman & Co. Ltd. With ‘Birth Of India’s Freedom’ as its lead headline, the newspaper echoed a festive mood on both sides of the border along with announcements on the new cabinet. The Hindustan Times was founded by Sunder Singh Lyallpuri (freedom fighter and founder of the Akali Movement) in 1924, with Mahatma Gandhi attending the launch of the paper. The lead headline across the front page celebrated the emergence of an India free of British rule. It also covered cabinet berth announcements and news of the cabinet’s swearing ceremony, a homage to the Father of the Nation and a brief editorial on what lay ahead for the free nation. 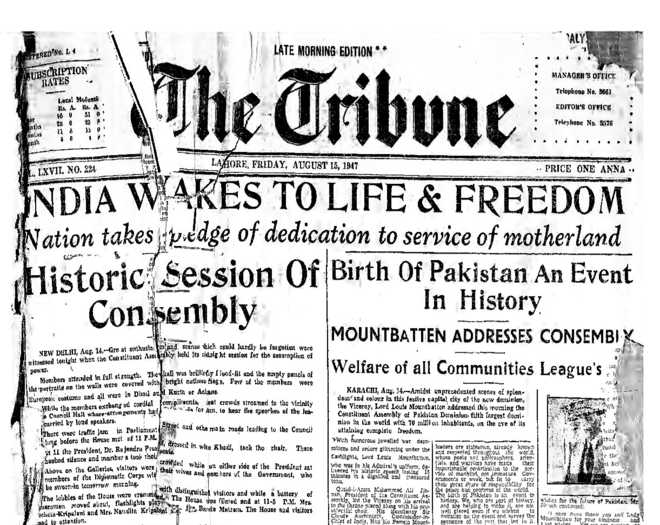 The Tribune was first published in 1881 from Lahore, and published by Sardar Dyal Singh Majithia, a public-spirited philanthropist. Even though only half of the paper could be procured from the archives of The Tribune, the daily loosely borrowed the powerful words of Jawaharlal Nehru’s iconic speech, at the midnight session of Parliament, for its lead headline. Alongside, the historic news of Pakistan being born and the momentous session of the Indian Constituent Assembly also find place on the front page. 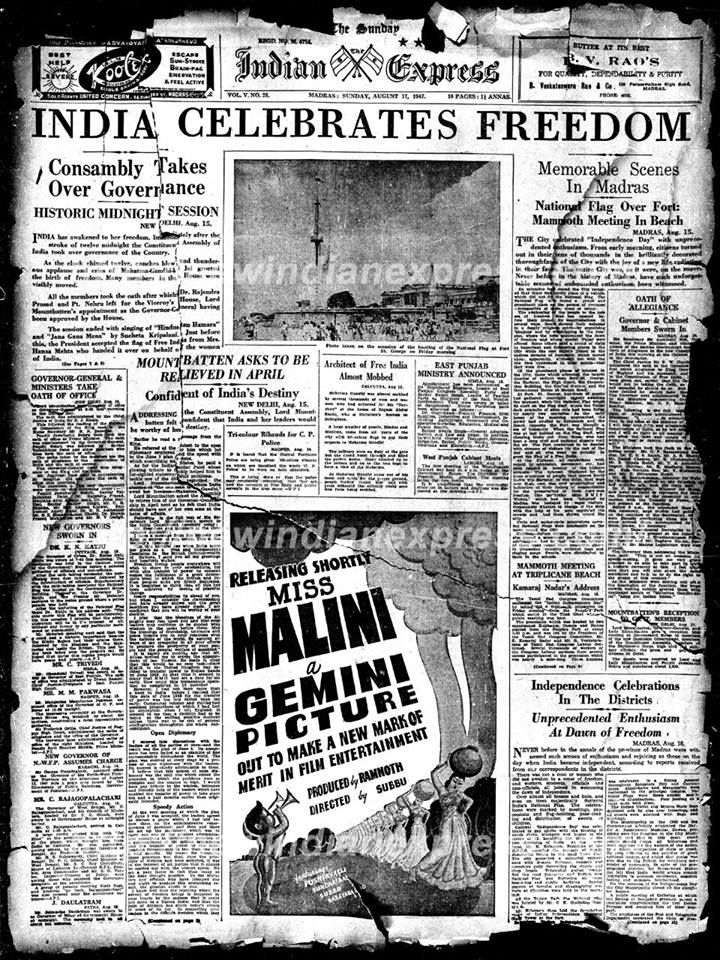 Launched in 1931 by an Ayurvedic doctor Perumal Varadarajulu Naidu in Chennai (published by his ‘Tamil Nadu’press), The Indian Express was taken over by the great Ramnath Goenka within a year, who also later shifted the paper’s headquarters to Mumbai.The flavour of the paper on 15 August 1947 was festive⁠—with ‘India Celebrates Freedom’ splashed across the front page. There were other reports too⁠—on the appointment of the new cabinet, Lord Mountbatten’s announcement of returning to Britain and reportage on celebrations across India.

Do You Like This Story?
20
1
Other Stories
Please enter valid text
Must Reads
Latest Issue