The new year always brings prognostications, most of them wrong. You know who gets them right? A few good books (and movies) 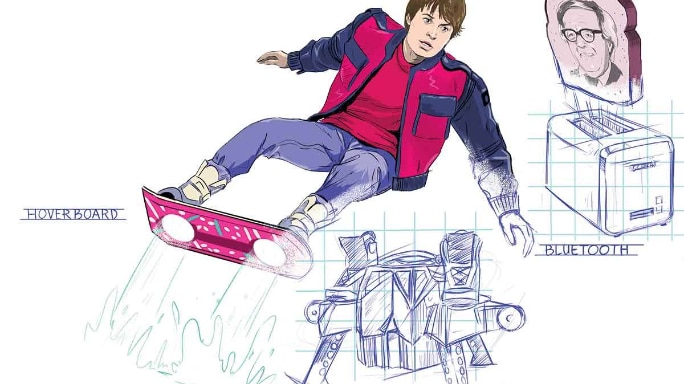 Sure, the DeLorean in the Back to the Future movies was a cool time traveller, but it had nothing on the levitating skateboard that Marty McFly (played by Michael J. Fox) hopped on to escape a bunch of thugs. Three decades later, a 40-year-old French inventor proved the scriptwriters prescient by hovering across the English Channel. Franky Zapata strapped his boots to a board connected to five small turbine engines (right) and made the 35-km trip from France in 22 minutes. And, unlike Marty, Zapata was smart enough to wear a helmet.

In his futuristic 1953 novel Fahrenheit 451, Ray Bradbury anticipated Bluetooth, describing wireless earphones that allowed for “an electronic ocean of sound, of music and talk” to be transmitted through the air. Imagine how thrilled he would have been with a Bluetooth toaster! That was the idea behind Griffin’s Connected Toaster, which alerted you via smartphone when your toast was done. At $100 [`7,170], this baby cost a lot of bread, which may be why it was discontinued just two years after launch. The Apple Watch lets you chat, play games and watch videos on a device strapped to your wrist. Cool, huh? The Jetsons thought so ... in 1962—when Steve Jobs was still in second grade!

Nikola Tesla called it! In 1909, the famed electrical engineer told the New York Times, “It will soon be possible to transmit wireless messages all over the world so simply that any individual can carry and operate his own apparatus.” No doubt he was thinking of the Kérastase Hair Coach brush, which measured brushing speed and employed a microphone to listen to your hair, all to compute an overall hair-quality score sent to your smartphone. (Alas, it too is gone.)

Writer Arthur C. Clarke (2001: A Space Odyssey) saw a world in which no one got lost. In 1956, he wrote that satellites “could make possible a position-finding grid whereby anyone could locate himself by means of a couple of dials on an instrument about the size of a watch.” Clarke didn’t mention that his system might also track another person, such as a criminal. Last year, the New York City police nabbed a burglar who was wearing a GPS ankle monitor—because he was still on probation for a prior conviction.