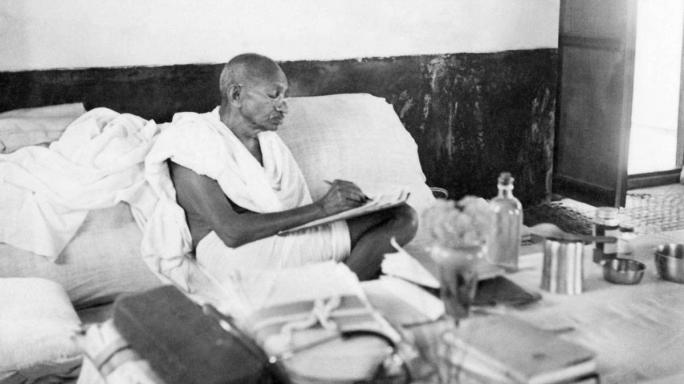 Towards the end of his life, Gandhi was asked by a friend to resume writing his autobiography and write a “treatise on the science of ahimsa”. What the friend wanted were accounts of Gandhi’s striving for truth and his quest for non-violence, and since these were the two most significant forces that moved Gandhi, the friend wanted Gandhi’s exposition on the practice of truth and love and his philosophical understanding of both. Gandhi was not averse to writing about himself or his quest. He had written—moved by what he called antaryami, the dweller within, his autobiography, An Autobiography or the Story of My Experiments with Truth. Even in February 1946 when this exchange occurred he was not philosophically opposed to writing about the self. However, he left the possibility of the actual act of writing to the will of God.

On the request for the treatise on the ‘science of ahimsa’ he was categorical in his refusal. His unwillingness stemmed from two different grounds: one of inability and the other of impossibility.

He argued that as a person whose domain of work was action, it was beyond his powers to do so. “To write a treatise of the science of ahimsa is beyond my powers. I am not built for academic writings. Action is my domain, and what I understand, according to my lights, to be my duty, and what comes my way, I do. All my action is actuated by the spirit of service.” He suggested that anyone who had the capacity to systematize ahimsa into a science should do so, but added a proviso “if it lends itself to such treatment”. Gandhi went on to argue that a cohesive account of even his own striving for non-violence, his numerous experiments with ahimsa­ both within the realms of the spiritual and the political, the personal and the collective, could be attempted only after his death, as anything done before that would be necessarily incomplete. Gandhi was prescient. He was to conduct the most vital and most moving experiment with ahimsa after this and he was to experience the deepest doubts about both the nature of non-violence and its efficacy after this. With the violence in large parts of the Indian subcontinent from 1946 onwards, Gandhi began to think deeply about the commitment of people and political parties to collective non-violence. In December 1946 Gandhi made the riot-ravaged village of Sreerampore his home and then began a barefoot march through the villages of East Bengal.

This was not the impossibility that he alluded to. He believed that just as it was impossible for a human being to get a full grasp of truth (and of truth as God), it was equally impossible for humans to get a vision of ahimsa that was complete. He said: “If at all, it could only be written after my death. And even so let me give the warning that it would fail to give a complete exposition of ahimsa. No man has been able to describe God fully. The same hold true of ahimsa.” Gandhi believed that just as it was given to him only to strive to have a glimpse of truth, he could only endeavour to soak his being in ahimsa and translate it in action.

It is important for us to understand as to why it was a necessity of life for Gandhi to strive for non-violence. This striving is captured by the epigram with which this essay begins. Violence takes us away from ourselves; it makes us forget our humanity, our vocation, and our limits, and for Gandhi such amnesia can only lead to destruction of the self and others. The following section seeks to explain the complex set of arguments and practices through which Gandhi elucidated the relationship between non-violence and self-recognition and freedom. For Gandhi, freedom—both collective and personal—is predicated upon an incessant search to know oneself. This self-recognition, Gandhi believed, eluded all those who were practitioners and votaries of violence.

Gandhi described violence as “brute force” (sharir bal or top bal, in Gujarati) and non-violence as “soul force” (atma bal or daya bal, in Gujarati). The distance between the two, between the beastly and the human, is marked by non-violence. The idea of brute force locates violence in the body and the instruments that the body can command to cause injury or to inflict death. It connotes pure instrumentality. By locating violence within the realm of the beastly, Gandhi clearly points out the absence of the conscience, of the normative. He wrote: “Non-violence is the law of our species as violence is the law of the brute. The spirit lies dormant in the brute and he knows no law but that of physical might. The dignity of man requires obedience to a higher law—to the strength of the spirit.” The term ‘soul force’ is indicative of the working of the conscience, of the human ability to discern the path of rectitude and act upon this judgment. In a speech given before the members of the Gandhi Seva Sangh in 1938, he brought this distinction sharply into focus: “Physical strength is called brute force. We are born with such strength ... But we are born as human beings in order that we may realize God who dwells within our hearts. This is the basic distinction between us and the beasts ... Along with the human form, we also have human power—that is the power of non-violence. We can have an insight into the mystery of the soul force. In that consists our humanity.” Gandhi clearly indicates two aspects: One, that non-violence is a unique human capacity; it is because we are capable of restrain, of non-aggression, of ahimsa that we are human. Two, to be human is to fulfil the human vocation, which is to realize the God—Truth as God—who dwells in our hearts. This was Gandhi’s principle quest.