Stranded In Bad Weather In A Foreign Land, An Act Of Compassion Changed Everything

On board the Boeing-747 Swissair Plane from Zurich, the author's local travel companion extended a helping hand 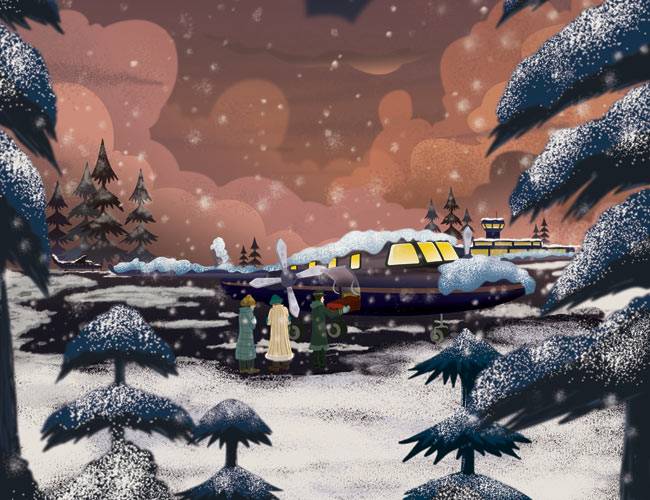 THE BOEING-747 SWISSAIR PLANE I was flying on, made a smooth landing at Zurich at about 6.30 a.m. Peering through the window, I could see the snow-covered runway. It was early February [in 1993] and it had been snowing heavily. It was pitch dark outside, as I headed to the transfer desk. My plan was to catch a flight to Lugano, in Switzerland, and then be driven to Luino, in Italy, my work destination, at a distance of about 30 kilometres. At the transfer desk, I requested for a window seat on the Lugano flight. The clerk remarked that there were only window seats on the aircraft-I was to board a 12-seater single engine turbo-prop with a single row of seats on either side of a narrow aisle. Oh dear, I gulped nervously-these rickety little aircraft reminded me of flying auto-rickshaws.Nevertheless, I boarded with ten other passengers. As the plane taxied its way on to the runway, the pilot announced, "Ladies and gentlemen, Lugano airport was closed for the past four days due to heavy snowfall. We intend making another attempt at landing today, failing which you will be flown to Venetzia (Venice)!" I instantly raised my hand and protested: No way did I want to go to Venice; I would much rather stay back in Zurich. Four others echoed my request. The two-member crew, the stewardess and the pilot, had a quick consultation. Soon, the aircraft turned around and headed back, stopping at a distance from the terminal building, possibly owing to airport restrictions. The heavy snowfall had now turned into a blizzard. We were helped out of the aircraft by the crew through the blinding rain and sleet. Freezing at a minus 6 degrees Celsius, we stood there soaking wet. While we waited, the pilot got out, opened the small luggage compartment and pulled out our baggage.

It was still dark and I was in a daze. One of the passengers who had got out with me suggested I follow him. He was a Swiss gentleman, he looked about 50, was tall, well built and courteous. I do not know his name until today, so let me call him Bob. I joined him, lugging my heavy bags over 300 metres to the tarmac. We had to find our way into the terminal building through the rear end. Bob seemed to be a frequent traveller and knew his way around the airport. We entered the building through the back door, crossing intricate passageways, up several stairs and finally arrived at the well-lit hall. There was a long queue at the help desk that we joined. Bob explained our predicament to the official who endorsed our tickets, stamped them and said, "You can travel by train to Lugano-first class-at no extra cost." Bob guided me through the terminal shuttles and the various complexities of the Zurich airport. He could see I was a bit lost, and struggling with my luggage. He quickly lent me a helping hand. I needed to contact the driver who would be waiting at the Lugano airport to pick me up. Communication was difficult those days as there were no cell phones. Being a Sunday, no one at the ImpiantiMacchineFonderia (IMF) office, where I was headed on work, could be contacted. Bob stepped in here too: he made several calls and finally reached the staff at Lugano airport and requested them to page the driver with instructions to meet me at the Lugano railway station, instead of the airport.

Seated in the cozy comfort of the first-class coach, I finally heaved a sigh of relief. With a muffin and a hot cup of coffee, I sat back and began to enjoy the three-hour ride to Lugano. The train wound its way through the scenic Swiss countryside, amidst heavy snowfall. Much as though I'd meant to find out more about my kind co-passenger, we did not speak much. Firstly, we were all quite exhausted. Also, Bob had met a lady, an acquaintance, on the small aircraft. She was also travelling on the same train and he ended up chatting with her during the journey. We got to Lugano at about 3 p.m. Walking out, we found the normally busy railway station deserted and my driver from IMF was nowhere to be seen. There were very few taxis waiting at the stand. Bob waved out to his wife and two teenaged daughters who had come to pick him up. I thanked Bob, said my goodbyes and was about to leave. But, not so fast: he offered to fix up a taxi for me to go to Luino before we parted. Moved beyond words by his kindness, I mumbled words of gratitude and stood by.

None of the taxis agreed to take on the long trip across the border in the terrible weather. Finally, an Italian driver agreed. Bob appeared to have a heated discussion with him in fluent Italian. Next, I saw him angrily pull out my bags from the taxi and load them onto his own car. I was baffled, unable to follow the cause of provocation. Bob explained that the driver demanded an exorbitant fare – an equivalent of $500 in lira, the local currency. "Let us go, I will drop you," he said, irritated with the driver. I did not know what to say. Helpless as I was, I accepted the offer. It was a remarkable gesture from a total stranger. He was offering to drive 60 kilometres [30 km each way] in bad weather – to another town across the border! He had done enough to help me already, he could very well have preferred the company of his family in the warmth of his Lugano home, after this long day. During our drive to Luino, I learnt that he had spent many years in Asian countries, particularly in Singapore. Being a banker, he was aware of the foreign exchange restrictions on visiting Indians, and guessed I wouldn't be carrying a large sum of forex with me.As he dropped me off at my hotel in Luino, I thanked him profusely. Before I could ask his name, which I had been meaning to all along, he waved a cheerful goodbye and drove away towards Lugano. He remains for me the anonymous Good Samaritan, even to this day.

The author is 82 and is enjoying retired life in Bengaluru.

Do You Like This Story?
59
1
Other Stories
Please enter valid text
Must Reads
Latest Issue