The Classroom With A Difference 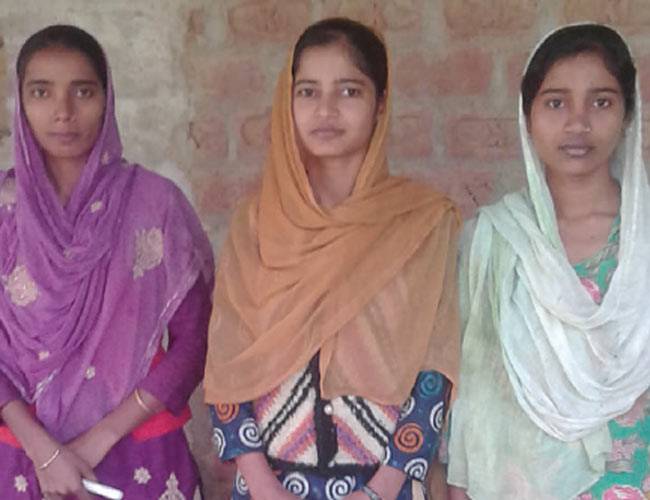 It's an unconventional setting. Children of varying ages recite tables animatedly. Seated next to them on the same rug are teenagers, many of them girls, gazing at the Hindi alphabet on the blackboard. At the helm of this class-or classes-are three young girls, not much older than their adolescent students. Dressed in simple salwar kameez, a dupatta over their heads, they blend in. But when Tabassum, Tarannum and Rubina, no more than 22, start speaking, you know the difference. The confidence they exude takes you by surprise. And you know that their uniqueness has only begun to unravel.

A little over 10 kilometres from Varanasi, the village of Sajoi is nothing like its well-known neighbour. A glaring example of the many Indias that exist within India, it had blocked out modernity until recently, especially when it came to its women. Educating girls was considered pointless, and the prospect of women stepping out of their homes, unthinkable.

Things began to change in 2010 when Human Welfare Association (HWA), a Varanasi-based NGO, identified Sajoi for a planned intervention. "The village had a mixed demographic and illiteracy was all-pervading," says Dr Rajni Kant, the founder-director of HWA. "The Muslim weaver community used to engage its children in the traditional occupation and preferred sending them to handlooms instead of schools."

HWA set up a centre in Sajoi, along with eight other villages, to impart free education and vocational skills but the village folk needed to be convinced to join in. This was particularly challenging in the weavers' basti and the organization needed volunteers who valued education. No one got this better than Tabassum and Tarannum Bano, the studious daughters of Abdul Khalik, a saree embroiderer. Together with their friend Rubina Bano, an equally sincere student, they embraced the opportunity.

The three friends had completed their schooling-no mean feat for girls in their community. "Our father doesn't know how to read or write, but every evening he shares with us what he has learnt from life," says Tarannum. "His most important lesson is that education is non-negotiable," adds Tabassum. Rubina was also fortunate to have a 'modern' grandfather.

Getting an education in a village that had a government school only up to class five, however, was no cakewalk. For middle school, the girls would have to travel to a nearby village and their families were worried for their safety. But they found well-wishers along the way: The headmaster of their primary school, Shyamlal Debuy, ensured that the girls went ahead with the admission and often accompanied them en route, much to the relief of their families.

Continuing their education after class eight meant joining the private school in Sajoi at higher fees. Tabassum and Tarannum found a way out: Though they both took admission, each of them would attend classes on alternate days, while the other stayed at home to assist their father in his embroidery work and earn some extra money. When the school's principal, Ashok Srivastav, learnt about this, he allowed them some leeway in fee payment and made sure the three girls were brought up to speed with the others in their class.

After 12th standard, the girls wanted to pursue graduation, but finances had dried out and they were at home, restless, when HWA came knocking. "People's reluctance to send their children to school always startled us," says Tarannum. "So we were excited that we could do something about it." The girls set out on their mission for a monthly stipend of Rs 1,500 each.

A madrasa in the basti, which had been practically shut for 17 years, came alive with blackboards and charts. Every corner was scrubbed clean and rugs were rolled out, except that the children stayed at home and the settlement continued to look away in ignorance.

"We went knocking at every door, talking to elders, getting snubbed,"recalls Rubina. Some villagers asked them to mind their own business, while others questioned their qualification to teach others. Some even lectured them about the threshold of "dignity" they were crossing. "We didn't let all this waver our attention from the main goal-no angootha-chhaaps in Sajoi," Rubina says, her determination palpable in her voice.

The trio honed their approach. They didn't ask people to stop their children from working, but urged them to send them to the madrasa for an hour or two. Slowly, children started trickling in. Motivational Learning Centre, as the girls call it, is no replacement for school. It is there, in fact, to create the hunger for knowledge, which can get satiated only in school. It also helps school-going children so they don't lose interest and drop out.

Those who doubted the girls' intentions now recommend the centre to others. Shyamlal Debuy is a proud man. "The three brilliant toppers of this school have topped in life too!" he rejoices. The number of admissions to his school has steadily increased and the dropout rate has fallen.

With over 100 children at the centre, the trio now shifted their focus to the girls of the locality with the motto, Silai-kadhai to ek bahana hai, asli maksad to padhana hai[Tailoring is only an excuse; our real aim is to educate]. Under HWA's guidance, they started tailoring classes. But it soon became a task explaining to people why their daughters were learning numbers and the alphabet on the side.

Seasoned, the girls had their reply ready. "We'd tell them that maths is a requirement for measurements and they would agree," chuckles Tabassum. More plausible reasons would then be slipped in. "If your daughter or sister is in danger and wants to find her way home or dial your phone number, how would she do that if she can't read or write?" Their ideas began to resonate.

Says Julekha Begum, whose daughter Reshma studies in the eighth standard, "I am so happy that come what may, these wonderful girls never let the centre suffer."

Even if that meant being ousted from the madrasa. The news of the task Tabassum, Tarannum and Rubina had taken up spread. In recognition of their work, the news channel CNN-IBN conferred on them the Real Heroes Award in 2012. They also received a cheque of Rs 3.5 lakh, a part of which they spent on getting the madrasa renovated. All this upset certain people. Saying that they objected to the inclusion of Hindi, English and maths lessons instead of only Arabic and Urdu, they forced the girls to leave.

The centre then moved to the humble home of Tabassum and Tarannum. They got a tin shed extension and the classes continued. The trio also bought a laptop for the centre and secured admission in a nearby Industrial Training Institute (ITI).

Having resumed their studies, the girls are busier than ever. Their day starts at 5 a.m., and by 7, they are ready to teach and continue until 10. It takes about an hour to reach the ITI and they return home by 5 p.m. An hour in the evenings is reserved to help those who already go to school.

This hasn't stopped the girls from making themselves useful in other HWA programmes. They help run some self-help groups for women.

With such good work underway, Sajoi caught the attention of the Noida-based DS group. Under their Corporate Social Responsibility (CSR) programme, the company along with HWA adopted Sajoi, further accelerating the process of change. Computer-aided support centres, vocational training centres for young girls, support to six anganwadi centres, and a sanitation and cleanliness campaign in the village have been launched.

But it is the intangible effects of education that bring the biggest smile to the girls' faces. "We used to celebrate only religious festivals in Sajoi," recalls Tabassum. "But now we hoist the tricolour on Republic and Independence Days with gusto." Adds Tarannum, "Much of healthcare here meant home remedies. Not any more." Says Rubina, "We can't explain the joy of seeing Sajoi's bahu-betiya sign their names instead of pressing their thumbs against an ink pad!"

What happens when they find a job and move to another city? "There's a whole young brigade, including our younger siblings, who are teachers in the making," say the lively sisters. "After all, the work has only begun."

As India celebrates International Women's Day on March 8, and rejoices at the rise in its female literacy levels, this modest little army of girls will be toiling away, bringing an irreversible change to a sliver of India it has put on the development map.

Do You Like This Story?
40
0
Other Stories
Please enter valid text
Must Reads
Latest Issue