#Good News| Smile Musketeers, A Special Wedding at a Relief Camp, and More

Young volunteers at flood-relief camp bringing a smile on children's faces, schoolchildren making seed-balls, a wedding at a relief camp, a fisherman who risked his life several times to help people, and other good news 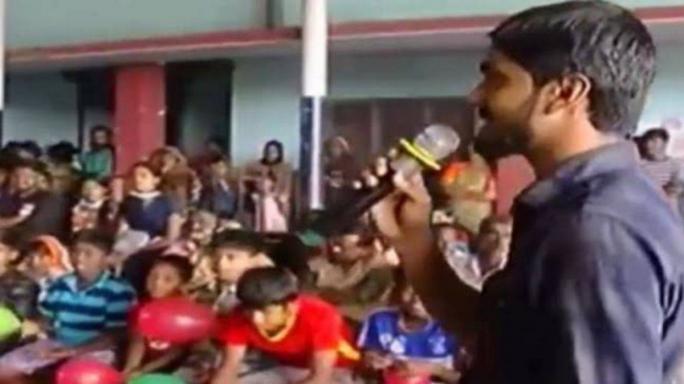 In troubled times, even a hard-earned smile is valuable. Young volunteers at the Meppadi flood relief camp in Kerala are trying to bring a smile on the faces of children, many of whom lost their family members to a landslide that buried an entire village earlier. Fluttering around a room filled with colourful balloons whilst holding a mic in their hands, they ask these children to sing along and play games with them. They also organise exercise and other activity sessions to help them make new friends and cope. Other survivors have gone on record to say these games bring a smile onto these children’s faces and help them forget the pain. The volunteers say that they are just trying to make them happy. Rabiya and Muhammad Shafi were looking forward to their wedding scheduled to be held on August 18, until a landslide following the incessant rains in Kerala submerged Rabiya’s house in Chooralmala, Wayanad. Left with no other option, Rabiya and her mother, Jumailath rushed to the nearest flood relief camp at St. Joseph’s school in Meppadi.

In a beautiful turn of events, however, natives at the relief camp came together to organise her wedding ceremony with Perambra native Muhammad Shafi on the scheduled date. The Wayanad District Administration that solemnized their wedding took to Facebook to say, “All faces and hearts are happy today, at the camp. This is how we overcome the perils of disaster in a graceful way. Best wishes to the young couple.”

Venkatesh, 12, a Class VI student from a local government school in Karnataka, was awarded a bravery commendation on India's 73rd Independence Day for guiding an ambulance across a bridge that had been completely submerged by floodwater, making it difficult for the driver to distinguish between the road and the stream. The incident occurred near the Hirerayanakumpi village in Karnataka's Raichur district. It has been reported that the ambulance was carrying six sick children and the body of a dead woman. In a video filmed by a bystander, Venkatesh can be seen lumbering across the waist-deep water and even stumbling at two points, before being pulled aside by a man as the ambulance moves forward. He was later rewarded by the district administration for his bravery with the local superintendent of police, C. B. Vedamurthy, announcing that he will personally fund the class VI student’s education till he completes his graduation.

We salute his bravery!

In Coimbatore, over 10 lakh seed balls were made in 30 hours by students and volunteers at the ‘Seed Ball Festival’ organized by Thiyagi N.G. Ramaswamy Memorial Higher Secondary School and Ruthambra Yoga Centre. The two-day festival was organised from August '17-'18.  G. Sadhasivam, the school principal said that the festival was attended by over 6000 participants. He also said that once the seed balls are ready, they will be dropped in select locations with the help of the Forest Department. Seed-balls.com says that “seed balls are an easy and sustainable way to cultivate plants in a way that provides a larger window of time when the sowing can occur.”  Sadhasivam also says that “the seeds would last for nearly two years with 80 % chance of sprouting as they are covered with a mixture of mud, cow dung and compost.” Now that’s how you plan for a greener future!

Ramdas Umaji Madane, 55, is an ordinary fisherman from Dudhondi village in Sangli’s Palus taluka, Maharashtra. What is so very extraordinary about him is the fact that he risked his life repeatedly to bring hundreds of people to safety. Hundreds of villages in Maharashtra submerged due to the heavy floods owing to eight days of continuous rains and the coincidental release of water from three large dams—Warna, Koyna and Radhanagari—all situated in the Upper Krishna basin. Madane would use his agarala boat which looks like a coracle, to make multiple trips across neighbouring villages like Malwadi and Ghogaon, to transport people from flood-stricken areas to a safe place situated almost 2 kilometres away from his village.

It has been reported that he managed to save more than 500 lives. Kudos to our hero!