Humanity In The Deluge: Faith-Affirming Benevolence During A Mumbai Flood

Stranded by torrential Mumbai rains, these commuters found a safe haven with a large-hearted family 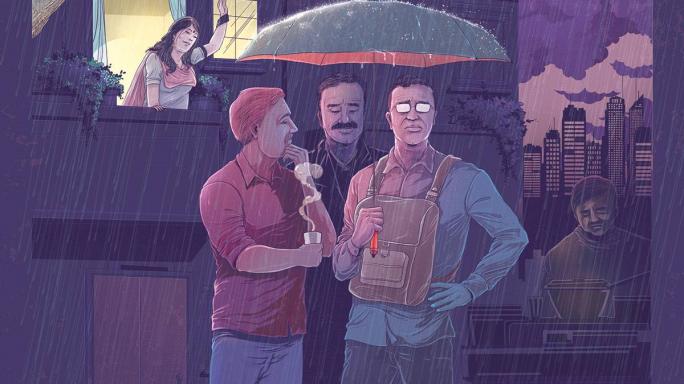 Waking up, I looked at the grim overcast Mumbai sky, thought a bit and then decided to go to work after all. This was two years ago, when I worked at my bank’s headquarters at the Bandra Kurla Complex. As I travelled from my house in Nerul, Navi Mumbai, the rain kept advancing along the 50-minute commute on the bus and local train. I reached office quite smoothly, but a few hours later, our phones started buzzing with news of flooding in various parts of the city.

Looking out of the window, my colleagues and I found that the steady drizzle had grown into a downpour, while gusty winds whistled through the streets. Though no one spoke about it, we got a bit nervous—none of us in the city have forgotten that July day in 2005 when Mumbai faced its worst floods.

At about 12.30 p.m., after an alert from the municipality, the bank let the staff leave early.

Some colleagues, who had already left, called to say that they were stranded—train services had been stalled and there were no buses or autorickshaws available either. At the office lobby a senior colleague, R. K. Kularay, who happened to live in Nerul, offered me a lift in his car. I agreed happily, since it would have been foolhardy to walk into the driving rain. We were joined by another colleague, Arvind Rampuria, and a vendor, who also hopped on.

The rain pelted down incessantly, and soon the roads were flooded with waist-high water. As we waded through it, we found volunteers and police personnel directing the heavy traffic and handing out biscuit packets to stranded commuters. They informed us that our usual route was heavily flooded and suggested we take the Sion–Panvel highway.

Midway between Kurla and Sion, the rainwater reached our car’s engine. We had no option but to park it near Kurla–CST Road. The first dry place we found was under a giant peepul tree with a raised platform surrounding it. We also spotted a tea stall nearby and got ourselves some much-needed tea and refreshments.

All along, I got frantic phone calls from my wife and parents, who were tracking the flood situation on TV. We looked up weather updates on our mobile phones and got more and more tense—home seemed far away. Had it not been for my portable power bank, all our phones would have been dead.

Our train of thoughts was suddenly disrupted by a raised voice. We looked around and found a lady calling out from the balcony of a run-down building behind us. “Please come in and make yourselves comfortable. How long will you stand out there?” she shouted out. We thanked her, but continued to wait.

After half an hour or so, I felt a tap on my shoulder. The lady from the balcony had come down accompanied by a man whom she introduced as her brother. This time, not heeding our remonstrations, they persuaded us to follow them.

We were pleased to meet the Bhosale family—the kind lady was apparently visiting her parents and was also stuck, just like us. The Bhosales had lived in the area for a few generations and ran a transport business. Their home and lifestyle were modest; what was extra-ordinary was the family’s kindness—they had rescued stranded folk during the 2005 floods as well, we learnt.

We were offered tea and the use of their washroom. By then it was 7.30 p.m. Grateful for everything, we assured them that we would leave as soon as the waters receded. However, the family would have none of it and insisted that we have the dinner that was being cooked for us. Their office was in the adjacent flat, where we were taken after snacks. It was a tiny room and all the furniture had been moved to one side to make space for us.

Much to our surprise, we met around 12 other people, who had been accommodated just like we were. Meanwhile, my wife called once again, anxiously. However, she was relieved to know that we were safe and comfortable.

Later, our hosts served each of us a hot meal of delicious pav bhaji. Completely satiated, and renewed with energy, we decided to attempt an exit. Unfortunately, even though the rain had tapered, the flooding remained.

We did not want to ask for further favours, but the Bhosales had anticipated that we would have to spend the night there and had made arrangements. Despite our hesitation, they brought in carpets and mats, spread them out and asked us to make ourselves comfortable. We were simply overwhelmed by their love and care. Exhausted, we turned in by 10 p.m.

At about 4 a.m., when the flood waters finally started to recede, Mr Kularay, who had been waiting on a chair all night, received a green signal from his driver. Immensely relieved at this, we started heading out. Not wanting to disturb our sleeping hosts, we quietly slipped a thank-you note under their door and left. On our way, we marvelled at the Bhosale family’s generosity—not everyone has the heart to rescue almost 20 strangers all at once and keep them safe.

I finally reached home at five in the morning. We came to know later that several people had lost their lives that evening—under collapsing buildings or sucked into manholes. It was a miracle that a kind family rescued a bunch of complete strangers—out of the blue. The Bhosales remain in our prayers to this day.

Do You Like This Story?
16
0
Other Stories
Please enter valid text
Must Reads
Latest Issue