Look, There's A Cheetah On My Head

Vijaya Pratap on the most chilling 45 minutes of her life 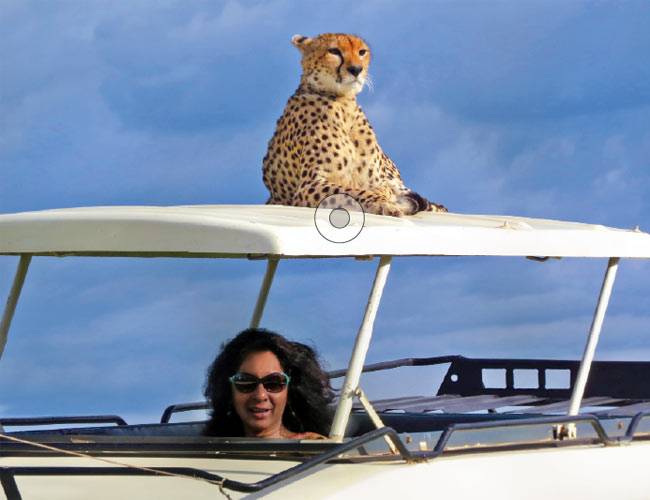 THERE WAS A cheetah on the roof of my jeep.

Its golden, spotted coat glistened under the overhead sun. The great cat stood still, an arm's length away-the only thing separating us was the metal roof. I could not see its head. Was it watching me and preparing to leap in at the right moment? What if it jumped in through the open sides? I had stopped breathing. As I waited for the cat to make its next move, cold shivers ran through my body.

Seated inside our 4×4 safari jeep were our driver Evans, guide Gilbert Kipchumba, both local men, and three other tourists. I was in the viewing area of the jeep, taking pictures. Long stretches of savannah grasslands surrounded us. We were deep in the midst of the Maasai Mara National Reserve.

It was March 2014. Hyderabad, where I live, had started turning warm and my job as a travel writer and blogger had finally yielded a trip to Kenya. Landing in Nairobi, I travelled en route to the market town of Nanyuki the same day. We took a 10-seater caravan plane (we had two women pilots). Flying very close to the ground, it offered a fabulous aerial view of the area, which lay along the Equator. After about 40 minutes, I experienced my first 'bush landing'. We travelled by road to reach the nearby Ol Pejeta conservancy. After a few days of spotting three of the 'Big Five' game animals-African elephant, Cape buffalo and rhinoceros (we missed the lion and leopard)-it was time to head to the wilds of Maasai Mara.

The reserve-stretching across 1,510 sq km, home to over 95 species of mammals and over 570 recorded species of birds-is just an hour away by air from Nanyuki. I spent the first day in a safari jeep and fell asleep in my tent at night, listening to the gurgle of the Mara river. I woke to the sound of cowbells, as the Maasai men herded their cattle along the river to the tune of chirping birds.

The second day started with an early morning hot-air-balloon ride, watching the sun rise and floating over the vast openness of the African savannah. Among my companions were a couple from Idaho, USA: we joked about the mosquitoes in our camp. After a quiet lunch we headed back out in our safari jeep, scouting for the big cats. I WATCHED IN AWE every possible kind of animal mood: on a chase or hunt, stalking the prey or sleeping. Every encounter was real, but I was hungry for more. Big cats (particularly the cheetah and tiger) have always fascinated me and I yearned for an encounter with the cheetah. Little did I know how I was going to get my wish!

It was a sunny yet pleasant afternoon. Evans-a tallish, bald, middle-aged man-regaled us with stories of wild animals and the life of the Maasai tribe. Gilbert, a stout man in his mid-30s, joined in. I listened intently while staring out of the jeep to get the best possible view. Our vehicle suddenly veered and came to a stop near a small bush. Instantly I spotted a cheetah, crouched nearby, his gaze fixed on something in the distance. I started taking pictures-as many as I could. The moment had finally come. I was thrilled that I could experience the big cat from such close quarters. It helped that the cheetah was sitting absolutely still, quite the perfect model, offering up a great photo opportunity. "He is stalking a gazelle," Evans whispered. He was trying to urge me to be quiet; if we were lucky, perhaps we could witness a dramatic hunt. I stopped taking pictures and went still. It's always a good idea to listen to someone who had spent 20 years tracking animals.

WITHIN A FRACTION of a second, the cheetah jumped onto our open jeep, its body right in front of me. It stood there, almost undecided. This unfolded so fast, I had no time to duck into the jeep. Was it going to jump in? Not yet-it just stood there, as if time had stopped. I prayed fervently, as the cheetah remained still, for almost four minutes. This was just too close. My life depended on the mood of a feline that had been an interesting subject for a travel story for me so far. Suddenly, the cheetah sprang up and perched on top of the jeep. I started breathing again. I heard Evans and Gilbert chuckle quietly. This was clearly the first time they had experienced this as well.

The big cat was in no hurry. It needed an elevated observation post to track its prey. We followed its movements through the shadow on the roof. It stretched out, tail dangling and well within reach. As time passed, I relaxed a bit. I was even tempted to touch it, to feel the texture of its fur. There was an aura of danger around the slender cat, yet it was strangely beautiful and irresistibly charming.

Evans gestured as if to say, "Don't worry, it will leave". It's like if a snake glides over your foot, it's best not to shake it off, because it may bite. It's better to stay still, until it leaves. Easier said than done.

Outside, the savannah breathed and moved on. A few safari jeeps came by and stopped. Excited at this windfall of rare footage, they took photographs hurriedly. I posed for pictures, even faking smiles and responding with a thumbs up. Then they left. Among them was the Idaho couple who took some pictures, which they shared with me later. We were alone once again. Just the six of us, the cheetah and the vast wilderness that stretched for miles.

Evans and Gilbert cracked a few cheetah jokes-none of which I remember. I was too petrified to laugh, being the one closest to the animal. If it got distracted from the hunt, it would certainly attack me first. I thought of my husband and children. Was the end going to come so far from home, away from my dear ones?

FORTY-FIVE MINUTES LATER, the cheetah finally stood up and jumped down, before sauntering away. He crouched in another spot, waiting to attack its prey. "Let's go," I told Evans, my voice cracked with anxiety. No more hunt-watching for me.

Well, not until my next trip to Uganda, on the trail of the mountain gorilla. I'm sure I will live to tell that tale too!

Do You Like This Story?
41
3
Other Stories
Please enter valid text
Must Reads
Latest Issue