Stuck in a city on the verge of lockdown, Kartik Gera and his wife have only one chance to get home 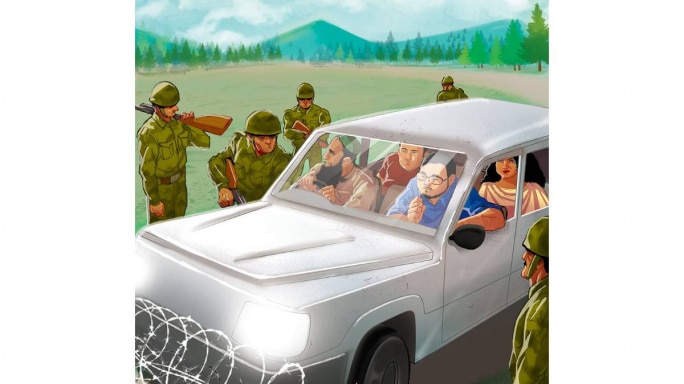 Thrilled … over the moon ... how else would you feel when you find out one of your best friends is getting married? The day Nishwan told me they’d set a date, glowing with happiness and a face-splitting grin, I started looking up tickets from Delhi for my wife Charvi and I. An August wedding in Kashmir was sure to be a beautiful affair. I’d visited Nishwan’s home in Rawalpora, Srinagar once before but this would be Charvi’s first trip and I was eager to show her around. We were a bit concerned about travelling to a place where violence and unrest were not uncommon, but it was Nishwan’s wedding, so there was no question about it—we had to be there.

We landed at Srinagar’s Sheikh ul-Alam airport around 11 a.m. on 2 August. The airport was packed and busy, but without chaos. Soon we were at the baggage carousel—Charvi was on her phone informing our families about our safe landing when she came across a news item online—the Amarnath Yatra (a popular pilgrimage) was cancelled due to a terror alert. All visitors and pilgrims were to leave Kashmir immediately. No wonder there are so many people huddled around there, I thought, catching sight of a bunch of tourists lined up at a kiosk set up to handle queries about the, now nixed, event. We also noticed a large group of soldiers, around 200 of them, waiting at the next carousel and a military aeroplane that Charvi looked up and found to be a C-17 Globemaster airlifter. I felt a ripple of discomfort, but reminded myself of the obvious—this could well be commonplace here.

The friend who came to pick us up reassured us that alerts like these were indeed not uncommon. In any case, we were headed to a secure place, away from the city. His calm demeanour and the sight of the local people going about their day, as usual, quelled the butterflies I felt in the pit of my stomach. Charvi was less convinced though. Closer to our destination, she pointed out a few locals carrying large loads of vegetables, egg crates and other food supplies. Meeting Nishwan’s family knocked us out of our worried stupor. Between the wedding regalia, family festivities and upbeat music, we soon shrugged off the stress and were swept up in the celebrations. Yet, I could not shake off the worry within that had gripped me earlier. I tried to stay cheerful, not wanting my paranoia to ruin the mood, but it was hard. Snatches of overheard conversations among the guests snapped me back to the turmoil building outside the happy bubble we were in—“ … something major is about to happen …”, “ … revokement of Article 370”, “ … no, no, they would never do that. It’s too big …”, “ … the protests will be massive …” Someone mentioned that they had just returned from the pharmacy, having bought a month’s supply of his mother’s medication. Everyone was weighed down by signs of the gathering storm.

By the next day, speculation was rife and information poured in from different quarters. ATMs were out of cash, petrol pumps were dry or refusing service. That afternoon, Charvi proposed that we cut our trip short. Our families felt the same way. But ticket prices for flights on the following day had skyrocketed: The one-way fare for a single seat to Delhi started at ₹17,000. But since we had planned for a longer trip, we got cheaper tickets to Goa, instead.

Once our flight was booked, we relaxed a bit and focused on the last day of the wedding celebrations, eager to spend as much time as possible with Nishwan and his family before we left the following day. We even set out to see a bit of the city. Our taxi driver advised us on areas to avoid, but, while we felt safe with him, it was unnerving to see the empty roads and dozens of trucks filled with CRPF soldiers passing by. We also heard about the Parliament session scheduled in Delhi on 5 August, the morning of our flight. Over the next few hours, things only grew more dire. Around 9:30 p.m., internet services stopped one by one; then mobile networks too. By midnight, we were cut off from the rest of the world.

After a sleepless night, Charvi and I headed out at dawn with a friend also leaving that day. But the taxi we had hired the night before was nowhere to be found. We had no way to reach out to him. With fuel stations dry, Nishwan couldn’t drop us to the airport either. We simply had to catch this flight. Three of us set out in different directions to find a ride, but to no avail. Time was running out so we approached Ali, the young security guard at the Airbnb where we stayed. He was fast asleep but groggily responded to our knocking and offered to head out to search for a car. As we watched Ali get on his bicycle and slowly pedal his way through the deserted streets, I realized he was our only hope. About 10 minutes later, Ali came back with a cab—a miracle, since we had tried to find and convince someone for the last 40 minutes or so. The driver was a middle-aged man who had just returned after dropping someone at the airport in his white Tata Sumo. Well aware of the risks the short 7-km journey could involve, he looked troubled by our request—and who could blame him? In Kashmir, a communications blackout and military personnel in the city could only mean one, hauntingly familiar, thing—a red-alert crescendo that rises from the expectation of violence. This meant barbed-wire barricades, arbitrary security checks, detentions, even arrests by intransigent, armed enforcers on patrol, all in a state of mistrust. No one was safe. But, perhaps sensing our panic, he agreed to take us on, even charging just `600 for the ride.

It was only once we reached the airport that it fully dawned on us—no way would we have made it past the four security blockades, multiple ID checks, a litany of enquiries and full-body scans of our car, and caught our flight, had this gentleman turned us away. Over the next few days, as reports of the city-wide lockdown and turmoil began to emerge, we felt nothing but gratitude for the benevolence of the two ordinary citizens who had every reason to refuse assistance to complete strangers, but chose to jump in and help instead.

As told to Ishani Nandi

Do You Like This Story?
18
0
Other Stories
Please enter valid text
Must Reads
Latest Issue