Her crusade to clean Varanasi's ghats has added a shine to the holy city. 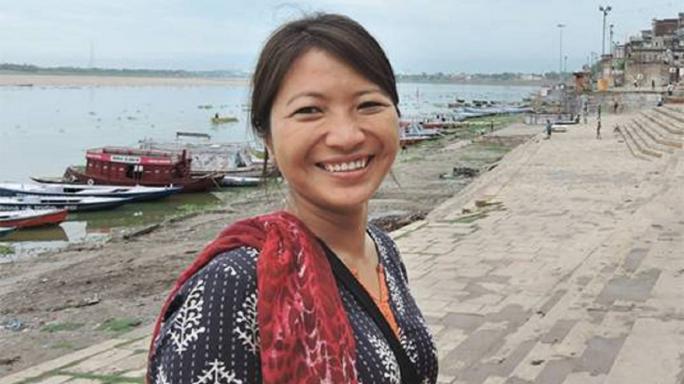 On 1 April 2015, Temsutula Imsong, 34, got a message from a friend saying the Prime Minister had mentioned her in a tweet. Temsu, as she is called by those close to her, texted back saying it was the best April Fool's Day joke ever. "I didn't believe that the Prime Minister of India was congratulating me for doing jhadoo," she says with a laugh.

But in the days before the media blitzkrieg of Swachh Bharat, Temsutula, and her band of volunteers, did more than just pick up a broom. It was work that saw the shramdaanis -- as Temsutula calls the volunteers, over 30-40 of them at the height of the movement in 2015 -- traverse six ghats across the holy city. The PM's acknowledgement was of two years of work, cleaning mountains of dirt and hours of hard labour under a sun that had hardened the filth on the ghats for over several decades.

It started in 2013 when, feeling unfulfilled by her teaching job in Delhi, Temsutula moved to Varanasi to join her friend Shailesh Pandey. He was setting up Sakaar, an NGO dedicated to creating opportunities in villages around Varanasi. "We were a bunch of friends from different parts of the country," she says.

It was during this time, while wandering the alleys of the ancient city along with her friend, Darshika Shah, that Temsutula realized the dichotomy. She wondered how people believed Kashi -- the stretch between the rivers Varuna and Assi -- was the holiest of places, yet defecated there.

So, she and Darshika gathered a few volunteers from the neighbourhood. They began with Prabhu Ghat. Years of excrement had built up, so they took along the basics: buckets, bleaching powder, phenyl, gloves. They first scattered bleaching power all over the ghat and swept whatever they could into a heap. The boatmen advised them to throw it into the water for the fish to eat. Instead, they carted the garbage to the municipal dumping ground.

Volunteers slept on the ghat and clicked pictures of people who defecated on the steps in the morning. The idea was to shame them into stopping it. Then they'd give them buckets to clean the spot. "This night vigil led to the Kashi Debates, where we'd get together and discuss topics of public interest. Sometimes, the kids from BHU (Banaras Hindu University) would bring their guitars and turn it into a jam session. It was a period of learning from people and also, by default, of keeping the youth away from smoking and drinking," she says. As #MissionPrabhuGhat grew in popularity, more volunteers joined in. In a week's time, it was shining.

"When the Prime Minister tweeted out to us, we realized that recognition came with responsibility, and we were encouraged to do more," says Temsutula. They moved to Babua Pandey Ghat, also known as Dhobi Ghat. "This stretch, over 60 metres long, was a dumping ground of everything. Name the garbage, and it was there. In fact, steps were buried under hardened garbage and silt." This took months of cleaning, but by now, the municipal authorities had begun to send their boats to collect the mountains of dirt.

They moved boulders, saris, glass bottles, plastic packets -- all in the scorching sun between April and June 2015. As they cleaned and cleaned, they found that nine steps had been buried under! In the end, they even constructed a volleyball court, so people would use the area more constructively and placed dustbins all over.

Temsutula found herself drawing on her experiences -- whether it was her work in the church social outreach programmes back home in Ungma village in Nagaland's Mokokchung district or her involvement in Saakar's work when she had just moved to Varanasi. Then, the effort had been to work with people living in villages around the holy city, helping them understand basic hygiene practices and support education. "We take so much for granted, but when you go into the villages you realize that people have not even seen a nail-cutter! They cut their nails with knives or blades, leading to many health complications. The smallest things need to be explained -- like why it's necessary to keep nails clipped," she says.

As she soaked up life in Varanasi, she understood that mythology was the holy thread that ran through the city. And this young woman from the faraway hills of the northeast is full of stories -- she recounts myths and legends, sometimes in chaste, albeit accented, Hindi.

Her fondness for Varanasi is evident, as is her passion to keep the ghats clean. The success of her crusade saw similar movements pick up the momentum, as did her attempt to unite all volunteers from across the country under a common umbrella, or Shramdaan as she calls it.

"It's great that the visibility went up, and, with it, the glamour of cleaning. Because, if you remove the ghats from Varanasi, what is the city? I was once asked by a journalist why I was cleaning the ghat, being a Christian. I think the ghats are for everyone. And the Ganga is a lifeline for India. The reality is that it is not a river that belongs only to the Hindus, but to all Indians."

So in 2015, on Dev Deepawali, when she and a group of shramdaanis covered the ghats with about 10,000 diyas, Varanasi poured out to help -- the Hindu priests, the Muslim weavers and the small band of Christians visiting the city. Because, finally, it's about goodness, and religion is just a path to find that in each of us.

Temsutula is now married to the founder of Sakaar, Shailesh Pandey. Together, with their band of volunteers, they have cleaned many more ghats and even a few water bodies in Varanasi.

Do You Like This Story?
26
0
Other Stories
Please enter valid text
Must Reads
Latest Issue