Jadavpur University: Upholding The Culture Of Resistance And Dissent For Decades

A look at the movements Jadavpur University has spearheaded and taken part in, over the years 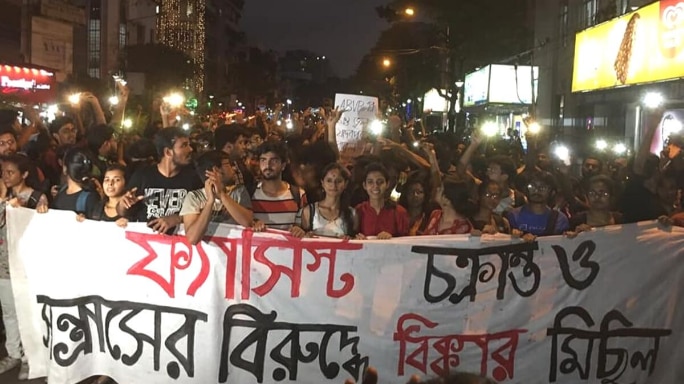 A scene from the 20 September 2019 rally against the ABVP's violence in Jadavpur University (Photo: courtesy Meghnad Bose/Facebook)

Campus protests and violence have resurfaced from time to time at Jadavpur University, ever since the times of the Naxalbari movement of the late 1960s. The most recent instance of this was the protests by some students against the entry of Union Minister Babul Supriyo on 19 September into the campus, leading to unprecedented violence—vehicles and shops were torched, while university property like furniture and windows were destroyed allegedly by rampaging ABVP supporters. But the students of the university, inspired by events and ideologies, have often believed in speaking truth to power. Many former students are very proud of this culture and are heard supporting it vociferously on social media.

Currently, in the aftermath of the violence following Mr Babul Supriyo’s visit, the university’s students and teachers organized a march to Golpark on 20 September—a day that ironically and fittingly also marks the five-year anniversary of the rally to Raj Bhawan in 2014. The culture of dissent is well and truly alive in Jadavpur University!