In the Land of Nirvana: The Many Charms Of Bhutan Landing in Bhutan’s Paro valley is nothing if not high drama—only a pilot officially trained in the unique terrain is allowed to land. Our descending plane manoeuvered through parallel ranges, took a sharp turn to the left and suddenly the valley was in sight—the Paro Chhu river gushing over a bed of large, white, glacier-polished pebbles; the unmistakable Rinpung dzong (Bhutanese monastery and fortress) standing tall against snow-covered mountain slopes and, as we emerged from the aircraft, the pine-scented, clean, spring air!

I’d been to Bhutan before, but this time I was determined to make the most of Bhutan’s peerless natural beauty through birding and camping trips with my husband Prashant, our trip organizer Karma and Yeejay (EJ), a professional birding guide. Our first night in Paro was meant to help us acclimatize to the 7,000-feet altitude and its characteristic chill. Early next morning, we were back at the airport, hoping for the clear weather we needed for a safe, cross-country helicopter ride to Trashigang, a town nestled in the cold, broadleaf forests of east Bhutan. Our pilot, a calm and competent Englishman, declared: “I will fly intuitively and weave through the valleys wherever visibility is clear. In case we don’t find an opening in the mist, we turn back.” Flying over the forest, we could see the tops of conifers and silver firs in the higher peaks, as well as larch, spruce and hemlock—all distinguishable from the air by their shapes and unique shades of green. As we approached Trashigang, a startled cry from the pilot snapped us out of our reverie. The only landing place for our chopper had been taken over by a local market! “I can’t land in the midst of all these people and stalls,” he said. His friendly, chatty tone switched to precise and steely. We feigned calm, even as our hearts collectively thumped in anxiety while the pilot sortied between the mountains, trying to find a landing spot. A few tense minutes later, a terraced farm came into view—freshly cropped, no people in sight. Our pilot circled the area, then gently touched down on the field. As we waited for our van which had just received our new co-ordinates, a truck full of curious, excited villagers drove up. One woman was sobbing because she thought we were planning to bomb them; another looked slightly disappointed that the chopper did not crash.

We headed over to the Kori La mountain pass by road. The visual symphony of the area was breathtaking—wild cherry, hemlock, oak and blue pine washed the mountainsides in varying shades of green, with white magnolia and pink cherry flowers standing out in bright contrast. After four days of forest bathing, we moved on to Yongkola, one of the best bird-sighting places in Bhutan, and set up camp. A fire was lit with soft pine logs just outside our tent and we sat around the warm glow, the heat soothing our road-weary bodies. 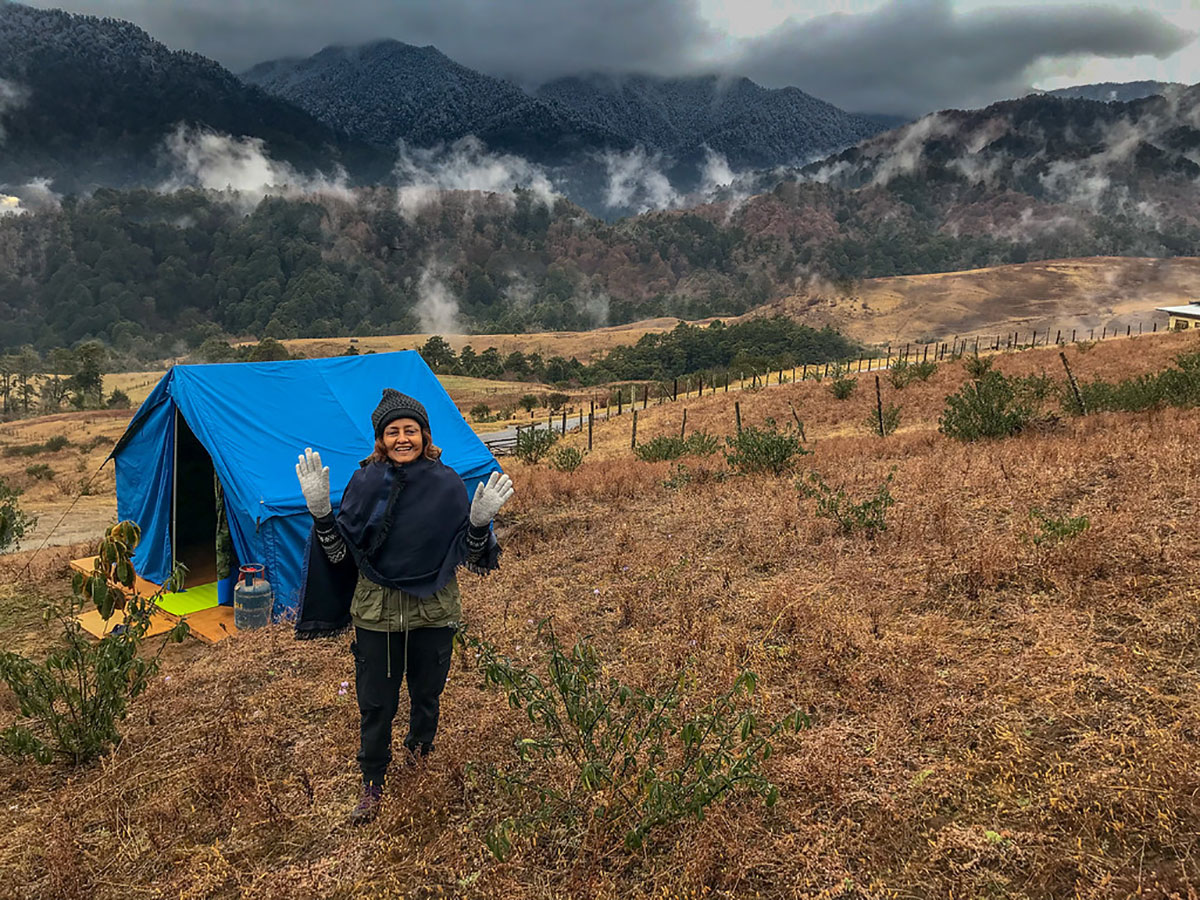 The author at the campsite at Sengkor Valley (Photo: Leena Gandhi Tewari)

Even in the middle of nowhere, our cook served us warm, hearty meals—everything from butter-tossed tender riverside ferns, forest mushrooms, kewa datshi (potatoes and cheese, bought along the way from local farmers), yak meat and hot, steaming herbal tea from freshly picked forest mint. By 9 p.m., we collected our hot-water bags and retreated into our beds to the sound of chirping crickets.

Stepping out into the pre-dawn mist, we washed our faces in warm water and wrapped cold tingling fingers gratefully around enamel mugs of tea. As the mist lifted, the drama of our surroundings emerged. I could count seven successive hill ranges—the nearest a verdant green and the furthest an ashy grey, clothed in wispy clouds. Four days in Yongkola brought delightful revelations of nature’s abundance: Lush patches of fern and bamboo, fascinating birds like the parrot bill, yuhinas, and, for me, the unforgettable experience of sighting a pair of rufous-necked hornbills! With their blue-and-lavender facial hues and disproportionately large, clumsy beaks, the birds settled on an extended branch. The female held a small, round berry in its awkward beak and tenderly shared it with her mate. Deep inside the forest, wild strawberries grew on the slopes and beautiful orchids bloomed in moss-covered crannies. We stopped for some warming tea by a bubbling brook and found an abundance of mint and marijuana along the banks. Walking through the pitch-dark forest for a nighttime birding trip, my heightened imagination conjured intriguing shapes. A collared owlet hooted his triumph over us in the dark; a frogmouth called from somewhere in the valley and a responding cry echoed out not too far from us. Suddenly, EJ sent a piercing beam of torchlight on to a nearby tree, then quickly arced the beam over to a neighbouring tree. A split second of confusion, and voila, we saw them—two amber glowing saucers. Another minute and a shape emerged—a pert nose, long body and an incredibly foxlike red furry tail: a Hodgson’s giant flying squirrel, high up in the treetop, moving on impossibly thin branches. The frogmouth, an expert at camouflage, proved elusive, although his call sounded close enough. A while later, we spied another pair of glowing eyes—the Malay squirrel, brown-backed with a buff underbelly. Fortunately, the Himalayan bears were still in hibernation—it would not have been pleasant to be surprised by one of them on our nocturnal jaunt.

On our last night, in Sengkor, it rained all evening and the night temperature dropped to –6ºC. The moisture on our tent turned to ice and sent frigid waves inwards. We made it through the night with woollen scarves wrapped around our faces, layers of warm clothing and our trusty hot-water bottles.

The next morning, looking out towards the idyllic landscape and a glorious dawn, I was suddenly struck by the thought of the Bhutanese philosophy of reincarnation, human or otherwise. We were left floating in an unimaginable sense of freedom.