The fascinating, little-known stories behind popular food offerings in five of India’s iconic places of worship How often have you eaten food that tastes absolutely delicious and called it ‘divine’? Food plays a huge role in the happiness and well-being of human beings. So, it is not surprising that most early human communities and civilizations offered food to their gods as a sacred ritual.

Food is an important element in the tales of several ancient civilizations. The ancient Greeks talked about ambrosia, which was considered ‘the nectar of the gods’ and was served at heavenly feasts. In Greek mythology, there was a nymph named Ambrosia who was turned into a grapevine, and the drink made from the fruits of this vine made the gods immortal. They even had a god of wine called Dionysus. In ancient Rome, Bacchus, the god of wine and agricultural produce, was one of the most important gods. In Japan, soy is called the ‘food for Buddha’, and temple chefs make simple, nourishing fare without meat or dairy in the country’s many temples.

Does God eat the food offered by humans in temples? Well, believers say that prasad is the food ‘graced by the breath of god’. It is possible that some of the best food in India has been made in temple kitchens! To know more about the wide variety of temple cuisine and sacred offerings to various gods and goddesses, read on.

The Jagannath Temple in Puri is special for many reasons, but what truly sets it apart from other temples is the mammoth operation undertaken by its kitchen. Called mahaprasad, the meal here is made of a whopping 56 items, and is cooked by a small army called mahasupakars. It is said these chefs don’t cook in their own homes, but only make food for Lord Jagannath in the temple. Seasonal produce, native rice varieties and vegetables such as yam, brinjal and red pumpkin are cooked to perfection and offered as bhog at five different times of the day, making sure that the gods are well fed! Unlike prasad, which is a small food offering; the bhog is a complete meal. The mahaprasad is called Anna Brahma, or the supreme among sacred foods.

Lakhs and lakhs of women congregate at the annual Pongal (which literally translates to ‘boil over’ in Tamil) festival, stooping over to stir brass or earthen pots on stoves made of firewood or bricks on the ground, to cook their sacred offering of pongal, a dish made of rice cooked in milk and jaggery syrup, mashed bananas, grated coconut and cardamom.

Legend has it that the Tamil epic heroine Kannagi, after burning down Madurai in anger because the Pandya king had wrongly killed her husband, reached this spot to pray and let her rage cool. The women of the village, having heard of the piety of Kannagi, gathered to welcome her and cooked sweet pongal in her honour. 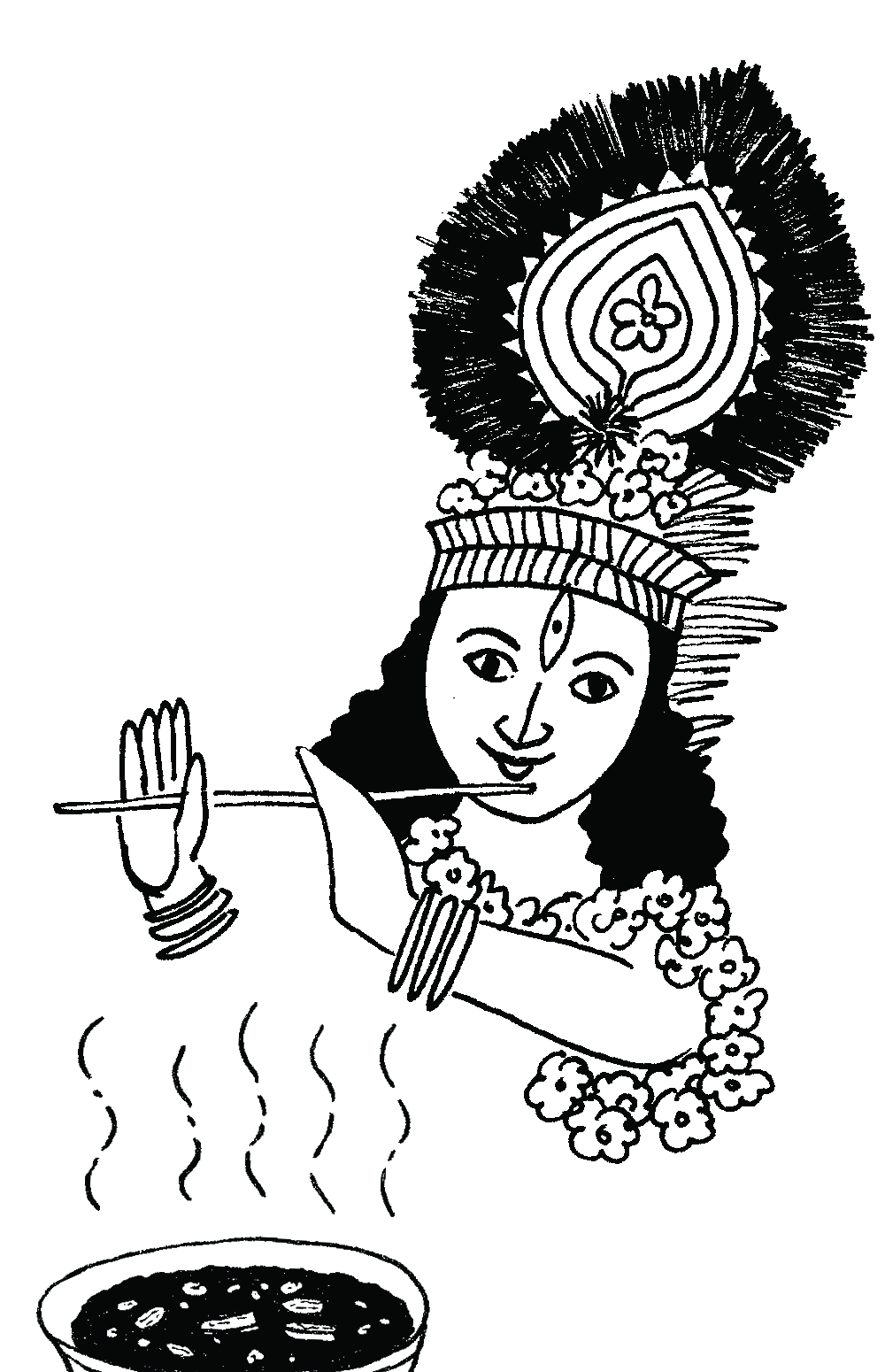 Temples across India make regional sweet delicacies and offer them to Krishna. One such example of a special food created for the god can be found in Manipur. A nutty-flavoured black rice is grown here, and it actually looks dark purple when cooked. At the Sri Govindajee Temple in Imphal, the 19th-century king Maharaja Nara Singh began the ritual of offering chak hao kheer as prasad. This is a pudding made of black rice, cooked in milk and sweetened with jaggery or sugar, and flavoured with cardamom and nuts. The temple priests are said to slow cook the pudding and the result is a decadent purple kheer that is both delicious and nutritious! The fearsome-looking towering figure of a man with a flourishing moustache at the entrance of many villages in Tamil Nadu is Muniyandisamy or Munieswaran. He is a folk deity [muni] often found seated, with protruding eyes, holding aloft a long blade. Munis [protective deities] are forms of bhoota ganas, or members of Shiva’s army. They are half-human, half-otherworldly. Locals mark their festivals by praying to the guardian muni and offering him produce, including vegetables, fruits and animals for sacrifice. Every January, during the harvest festival, the people of the village Vadakkampatti near Madurai offer their famous biryani as prasad to the guardian deity of the Muniyandisamy Temple. The biryani is made of thousands of kilos of rice, sacrificial chickens and goats and harvested vegetables. Many villagers take on the role of cooks to stir the aromatic rice preparation in huge cauldrons on firewood stoves throughout the night. The biryani is served as breakfast to the villagers after the early morning-prayer rituals to their guardian deity.

In ancient Tamil Nadu, the Siddars were a wandering group of hermits, who possessed a deep knowledge of medicine, alchemy and magic. Bhogar was a famous Siddar who was working on a medicine that could fight the vilest of diseases. Bhogar’s search for healing herbs and plants brought him to the Palani Forest, known for its fruit orchards. He worked with the mysterious herbs and chemicals here, and sculpted the idol of Dhandayudhapani Murugan in the Palani temple using an elixir called navapashanam (nine chemicals known to fight diseases).

The sacred offering in this temple is the panchamritham, or, the five-nectar jam. In the temple kitchen, the jam is actually made of more than five ingredients—bananas from Virupachi village in the Palani hills, jaggery, sugar candy, dates, raisins, ghee and cardamom. The proportion of each ingredient remains a secret known only to those who work in the temple kitchen, and the Palani Murugan idol of navapashanam is washed using this sweet jam. It is then offered as a potent prasad to devotees.