Heard of the Dirty Bomb?

For India, the threat of nuclear terrorism is real 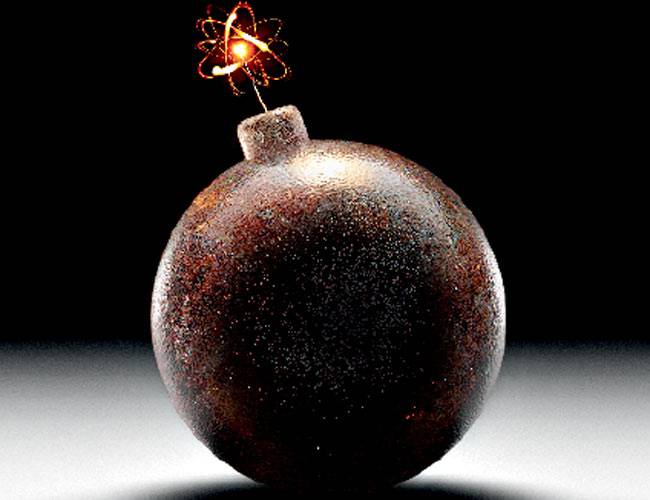 A COLLECTIVE GASP went up as terrorists flying a crop duster, sprayed deadly radioactive material over a densely populated area, causing sickness and death. More than 50 world leaders, including Prime Minister Narendra Modi, were at the fourth Nuclear Security Summit (NSS) in Washington, DC, watching a film that simulated a possible attack by terrorists and its aftermath.

When the ingredients (used in cancer treatment and blood transfusion) of a radiological dispersal device, or 'dirty bomb' as it is called, are packaged with explosives and detonated, those in the immediate vicinity will be killed by the blast. But the radioactive fallout may cause radiation sickness to thousands in an area of three sq km. The area would have to be cordoned off for years, until it is cleansed of contamination. This is a nuclear Armageddon that the world can ill afford.

THE THREE MAIN ways terrorists could stage nuclear attacks: detonate a nuclear bomb-either a weapon stolen from a state's arsenal or an improvised nuclear device made from weapons-grade nuclear material they smuggled out; sabotage a major nuclear facility and cause it to release large amounts of harmful radiation or detonate a dirty bomb in a city centre.

The attacks in Mumbai, Paris, and more recently, Brussels and Lahore, are indications that terrorists are looking for more dramatic strikes. The International Atomic Energy Agency (IAEA), which maintains a database of nuclear and radioactive materials, reported 2,734 confirmed incidents of either unauthorized possession, or theft of sensitive nuclear material and radioactive sources across the world, since 1993.

INDIA POSSESSES AROUND 120 nuclear weapons, 21 reactors that generate power including some that produce weapons-grade nuclear materials, large amounts of radio-active nuclear waste stored in special containment areas and over 7,000 institutions that use radiological devices, particularly hospitals, for both diagnosis (X-rays) and treatment (cancer). While a majority of the nuclear complexes are safeguarded and agencies regarded thorough, there are concerns that terrorists are employing increasingly sophisticated means to penetrate these institutions and facilities.

India has a strong command-and-control system that goes right up to the Prime Minister and the National Security Council, which controls movements of nuclear weapons. It is a tightly closed loop, which operates behind an extra-thick curtain of secrecy, and has remained impenetrable. Still, as the terror attack on the Pathankot airbase has shown, India's critical defence facilities remain vulnerable and call for even more stringent security.

While stealing a bomb is almost impossible, terrorists may actually make a dirty bomb by collecting weapons-grade nuclear material or harmful radioactive substances, used or stored in India's nuclear complexes. The source of danger: personnel with access to facilities, materials and sensitive information.

The Washington summit strongly emphasized beefing up personnel monitoring. It was discovered that ISIS operatives in the Brussels attack possessed a surveillance video of the home of a senior official in a Belgian nuclear research centre with substantial quantities of Highly Enriched Uranium (HEU) used in nuclear explosives. Investigators suspect that they planned to kidnap the official or his family in an effort to gain access to the facility. This is perhaps the first confirmation of ISIS's nuclear intent.

Indian nuclear establishments have a robust personnel reliability programme, but a report last year found that the protocols for hiring contractors and short-term labourers were erratic, though restricted to the outer periphery of the nuclear complex. Despite stringent measures, incidents-in power plants in Kaiga and Kalpakkam-involving personnel are worrying. Experts advocate setting up a separate nuclear constabulary for India's atomic facilities.

Major precautions have also been taken to ensure that radioactive waste from nuclear power plants is not misused. Low-level radioactive waste is segregated, solidified and packed into containers, and sent to specially constructed disposal structures with 24×7 surveillance. Almost 97 per cent of the spent fuel from highly radioactive waste is reprocessed for reuse, which prevents a build-up of plutonium stockpiling, a potential target for terrorists. The remaining waste is vitrified and cooled in vaults for 40 years before being disposed of in controlled zones.

The gravest danger comes from the dirty bomb or radiation dispersal device from radiological material commonly available in hospitals, industry and educational institutions. There are over 7,000 Indian institutions that possess machines using radioactive material necessary for diagnostics and treatment, apart from industrial use.

Following an incident in 2010, where a scrap dealer from Delhi's Mayapuri was found with a decommissioned cobalt unit belonging to Delhi University,safeguards were put in place, including a team dealing with thefts. It would be ideal if Parliament passed the pending 2011 legislation to establish a Nuclear Safety Regulatory Authority, fully independent of the DAE.

Terrorists breach borders and can pick up radiological materials from countries with lax regulations (in Central Asia and Africa). It is imperative that the world acts in concert now. Pakistan has the world's fastest-growing nuclear stockpile and harbours dangerous terror groups. While Pakistan claims that it has 25,000 troops to guard its nuclear stocks, there have been several attacks on other military installations, demonstrating terrorists' capabilities.

President Barack Obama initiated the NSS in 2009 to combat nuclear terror. Since then, 86 countries and five global organizations have formed an alliance. While much progress had been made until the fourth and final summit, the world remains vulnerable. Meanwhile, India has joined 37 other nations in implementing the initiatives taken at the NSS. Amongst them is the reduction of the 1,400 tonnes of HEU-the material terrorists need to make bombs-that 26 countries still have. Then there are egregious weaknesses, including a lack of equipment to detect radioactive material carried in a suitcase. As Obama said, the world was lucky that no terrorist had detonated the dirty bomb so far. But,if we ignore the warnings, our luck may soon run out.

Raj Chengappa is group editorial director, India Today Group and author of Weapons of Peace: Secret Story of India's Quest To Be A Nuclear Power.