The Biryani As A Symbol Of India's Composite Culture As I landed in Kolkata last night, I found my social media timeline flooded with pictures of biryani: everyone was celebrating the Aam Aadmi Party’s victory in the Delhi Vidhan Sabha elections with this pan-Indian favourite–I hear biryani sales soared yesterday. The idea that I keep repeating at every public forum, once again came to mind. Food is an expression of identity: We are what we eat. Interestingly, as we speak, the biryani has emerged as a symbol of who we are – a people shaped by the intermingling of many cultural and culinary traditions, a people who have withstood divisive forces, tempered by the multiple assaults on our syncretic traditions across generations. A people who, despite everything, have embraced external influences and assimilated them as their own to create a composite culture that is Indian. This is not an identity based on religion but one that has been created, over centuries, through the intersection of a shared heritage and culture.

The biryani arrived in India with the coming of Islamic culture and the Tehri--a vegetarian version--was created by the biryani makers as a thoughtful offering for their Hindu brethren, which at once points to their inclusive Ganga-Jamuni tehzeeb and recognition of the boundaries of privilege-- the meat was not always affordable after all.

Biryani today is an integral part of the pan-Indian culinary repertoire. It does not belong any more to anyone community or region, even though there are gharanas of biryani that are zealously guarded, as biryani chains across India’s cities and malls become ubiquitous. What we saw yesterday--the ecstatic and spontaneous celebrations over biryani—was a push back that had to come. A push back against the taunts about biryani being distributed in Kashmir, and definitely against Yogi Adityanath’s reference to this hero amongst Mughlai dishes. In a campaign speech in Delhi’s Karawal Nagar on 1 February, the Uttar Pradesh chief minister had slammed the AAP government, saying it “supplies biryani” to protestors in Shaheen Bagh. This resistance is embedded in the Indian DNA, rising against communal forces, every time there has been a threat to our diverse culture. What we said loud and clear with the biryani was, “No matter what happens, you cannot divide us on the basis of religion--because that is not who we are. We will eat, wear, sing and love as we prefer.”

I too dreamt of celebrating our composite culture over a dinner of biryani but, alas, had to spend my time on a flight. So here’s what I fantasized about high up in the skies with some of my favourite biryanis: 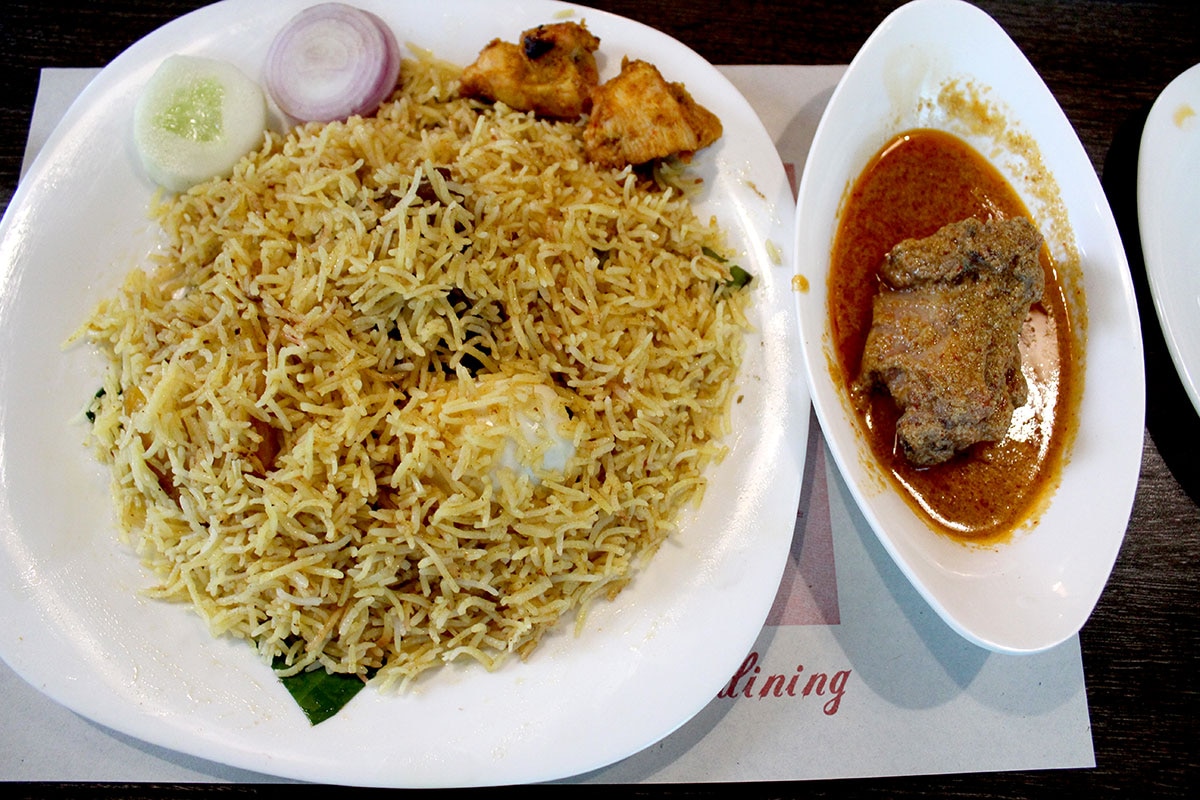 Originating from the Awadhi biryani when Wajed Ali Shah, the Nawab of Lucknow settled in Calcutta with his huge entourage, the potato made an appearance, it is said, to compensate for the lack of adequate meat in the rice, given the Nawab’s reduced circumstances.

Fiery and chilli hot, this biryani is a scorcher, the robust flavours offset by the delicate taste of mint and coriander.

It was celebrated chef Imtiaz Qureshi who revived the old Lucknawi style of slow dum cooking and this biryani excels in the soft, melt-in-the mouthpieces of meat nestled in the folds of fluffy fragrant rice.

From the kitchens of the Nawabs of Dhaka in Bangladesh, marinated meat in this delicacy is piled with parboiled rice and alu bukhara and cooked on dum with fragrances that seduce. Replete with fiery red masala redolent of all the spices of the coast that include pepper, star anise, garam masalas and coconut.

Considered the king among dals in Muslim cuisine, this biryani layered with richly cooked masoor dal, fragrant garam masalas, fried onions and ghee is to die for.

Fragrant small-grained rice is layered with the best of hilsa steaks marinated in yoghurt and other spices and then sprinkled with birista and ghee.

This is a sumptuous marriage of freshwater prawns, small-grained rice and coconut milk.

From the Gowda community of Karnataka, boiled eggs mixed with spicy green coriander and green chilli paste are layered with the rice along with carrots and beans.

Eggplant, aubergine or brinjal is what Bengal apparently gifted the world. Call it by any name, but how can Bengal then not have a Brinjal Biryani? A delicious biryani with stuffed baby brinjals—the stuffing can be a spicy vegetarian masala mix with tangy amchur, along with minced meats or shrimps and then lightly crumb fried and set on dum with yakhni rice, fried onions, alu bukhara and green chillies. This last one is my own creation, which reveals my entire identity on a platter. The recipe is available only on demand!

Pritha Sen is a culinary expert and chef, speaker and writer on the ethnography of food